His Voice Opens Doors of Opportunity for Matt Piescinski 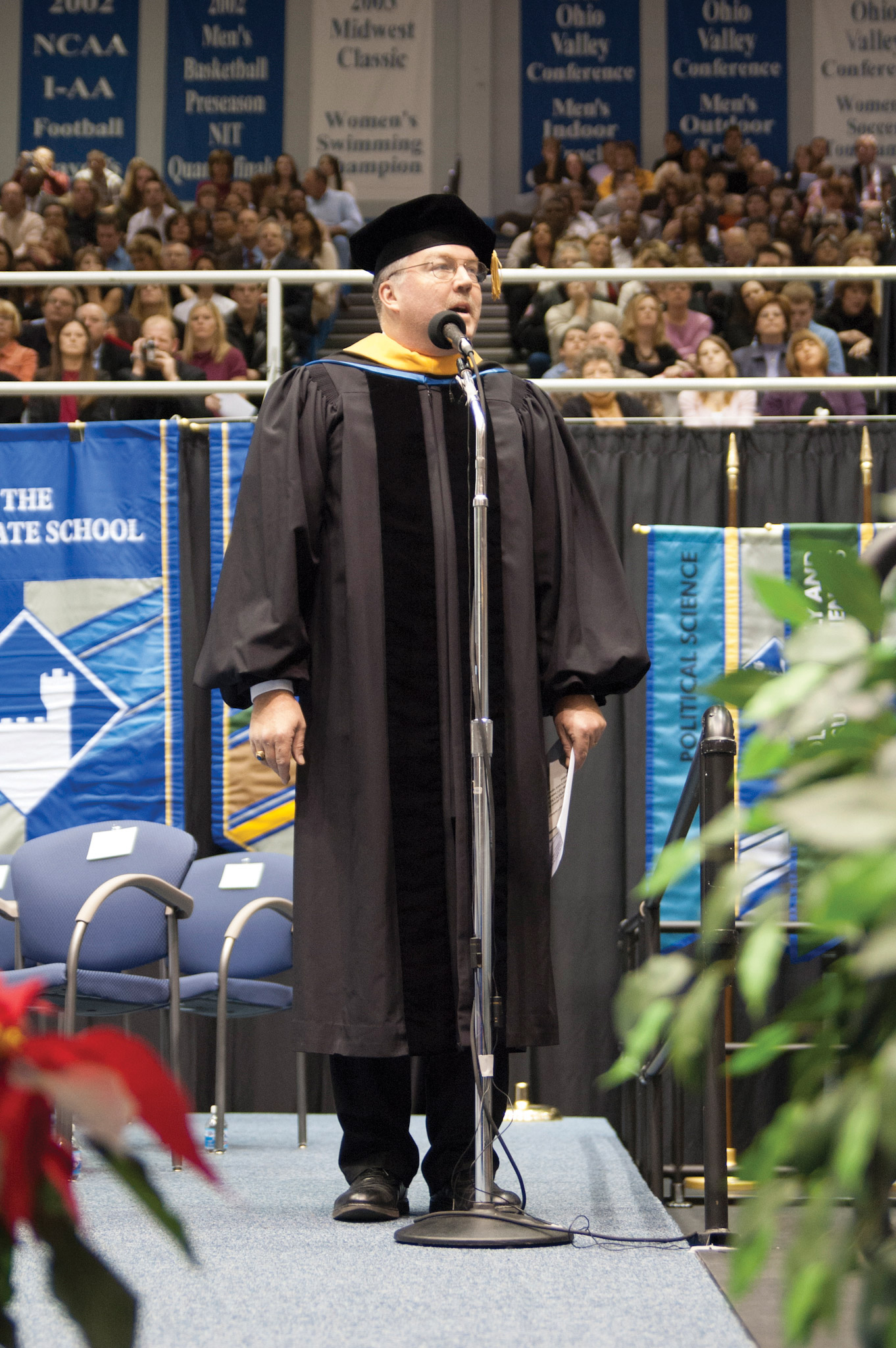 They may not recognize him by sight, but anyone who has attended Eastern Illinois University in the past 35 years has probably heard Matt Piescinski’s voice.

He serves as the public address announcer at the spring state track meets and the badminton state finals, as well as at some of the university’s football and basketball games.  Acting as master of ceremonies, he presided over Eastern’s centennial celebration as they opened the cornerstone at Old Main, and participated in the inaugurations of two university presidents – Carol D. Surles and William Perry.

“Those are exhausting days,” Piescinski said, noting that he might call out between 1,500 and 1,700 names in a  four-ceremony, 12-hour period (8 a.m. to 8 p.m.).  And that doesn’t include the quick chats he has prior to each individual ceremony with students who have unusual or hard-to-pronounce names.

Piescinski wants to get it right.

“(Former EIU President) Lou Hencken once told me that the university used to get calls from upset parents because their child’s name was pronounced incorrectly,” Piescinski said.  “They’d say something like, ‘We’ve paid you four years’ tuition and you can’t even get our kid’s name right.’

“We don’t get those calls anymore, Matt,” he added, quoting Hencken.

A Dolton, Ill., native, Piescinski began voice work even before graduating from Thornridge High School.  His district has a strong, comprehensive speech program, he recalled.

“The speech coach went to the athletic director and asked him to let me call the football and basketball games,” Piescinski said.  “Then there was radio speaking.  The work became self-motivating.  I found out that ‘I like this.  This is fun.’”

In the mid ‘70s, he enrolled as an environmental biology student at Eastern, but refused to give up his passion.  In addition to handling a demanding course load, Piescinski joined the staff of WELH, the university’s carrier current radio station and the precursor to WEIU-FM.  He became acquainted with Dave Kidwell, EIU’s sports information director, who invited him to announce during super sectionals.

There was no looking back.

Today, reflecting on the past four decades, Piescinski says, “I feel like I’m serving my alma mater on a number of levels.  And I’m having a lot of fun doing it.”

He recalls announcing during all of Sean Payton’s footballs games, as well as those of Tony Romo.  “And I knew Kevin Duckworth,” he added.

He acknowledges that other opportunities have opened up to him as a result of his EIU connections.  In addition to the state track meets in May, for example, Piescinski serves as the public address announcer for other track and cross country meets across Illinois – from Chicago to Belleville.

“I do get calls from across the state,” he said, noting that some find it unique to have “the voice of the state track meet” at their local event.

Piescinski personally finds those experiences invaluable, since he’s able to pick up useful information about the athletes that he can later use when he announces at state-wide meets.  In addition, the more interaction he has with the athletes, the better he gets to know them on an individual basis.

“I enjoy seeing kids come through Eastern, knowing that I saw them on a track somewhere along the line and now I’m announcing their names during commencement,” he added.

Piescinski admitted that his passion takes up a lot of time and that it’s a good thing he’s built up a healthy vacation package at his “day job” – using his chemistry background in the food safety division at Mars Petcare U.S. in Mattoon.  “Having six weeks’ vacation doesn’t hurt,” he said.  “I use up nearly a half of that every year doing this sort of stuff.”

That’s not to say, however, that his voice work can’t be a welcome respite.  In November 2012, for example, he spent Thanksgiving in Puerto Vallarta, Mexico, serving as a PA announcer at the men’s and women’s Division I Hoops for Hope basketball tournament.  He returned this year, taking along daughters Maggie, a sports enthusiast, and Leah, who appears to be following in her father’s announcing footsteps.

Aside from expenses, Piescinski receives no compensation for his work with Hoops for Hope.  He considers it a privilege just to be a part of the project.

The tournament was created by the Strohm family, originally from Marshall, Ill., and supports the National Urea Cycle Disorders Foundation.  This foundation is important to the Strohm family in that two of Jeff Strohm’s three daughters suffer from Argininosuccinic Aciduria (ASA).

Strohm was an NCAA assistant coach at Western Kentucky when his daughters were diagnosed with ASA, and the family connected with the NUCDF for information and support.  Strohm, who now serves as an assistant basketball coach at Tulane University in New Orleans, approached foundation officials with the idea of raising UCD awareness and support for NUCDF.

Those efforts ultimately led to Strohm’s brothers and sisters-in-law (most of whom, like Jeff Strohm and other members of the family, are EIU alumni) forming Plan BC3 to organize NCAA college basketball tournaments, including the NUCDF Hoops for Hope Classic (men) and the NUCDF Hardwood Tournament of Hope (women).  The final games of both tournaments were played in Puerto Vallarta.

Piescinski was contacted by Strohm and asked to be an announcer.

“I’ve known Matt for years,” Strohm said.  “As we started putting the pieces together for the tournament – who would do this, who would do that -- we got to discussing who would be a really good public announcer.  A friend mentioned Matt’s name and we agreed he would be perfect.

“I contacted Matt and told him, ‘I want you to become the voice of basketball in Puerto Vallarta.’  He agreed, and since the tournaments, I’ve heard nothing but compliments.”

“Veteran game announcer Matt Piescinski provided public service announcements about urea cycle disorders and NUCDF’s fight to conquer UCD,” Cindy Le Mons, NUCDF executive director, wrote on the foundation’s website.  “It was a surreal experience seeing our CureUCD logo on the marquee at the stadium and emblazoned on the basketball court, and hearing Matt talking about our fight to save lives. Matt gave us a voice -- and became a wonderful champion of our cause.”

In the past year or so, Piescinski has received the Distinguished Service Award from the IHSA (July 2012) and Honorary Referee recognition at the Illinois Girls State Track Meet (May 2013).  He was honored, but says the big pay-off of his announcing career is 40 years of opportunities he would never otherwise have imagined.

Still, he can’t help but wonder… What lies ahead?

“It would be nice to do a state championship football or basketball game,” he said, “and maybe a White Sox game.  You never know.  Maybe one of these days, the little pieces will fall together.”