'Just Moving Along, Following the Catfish...' 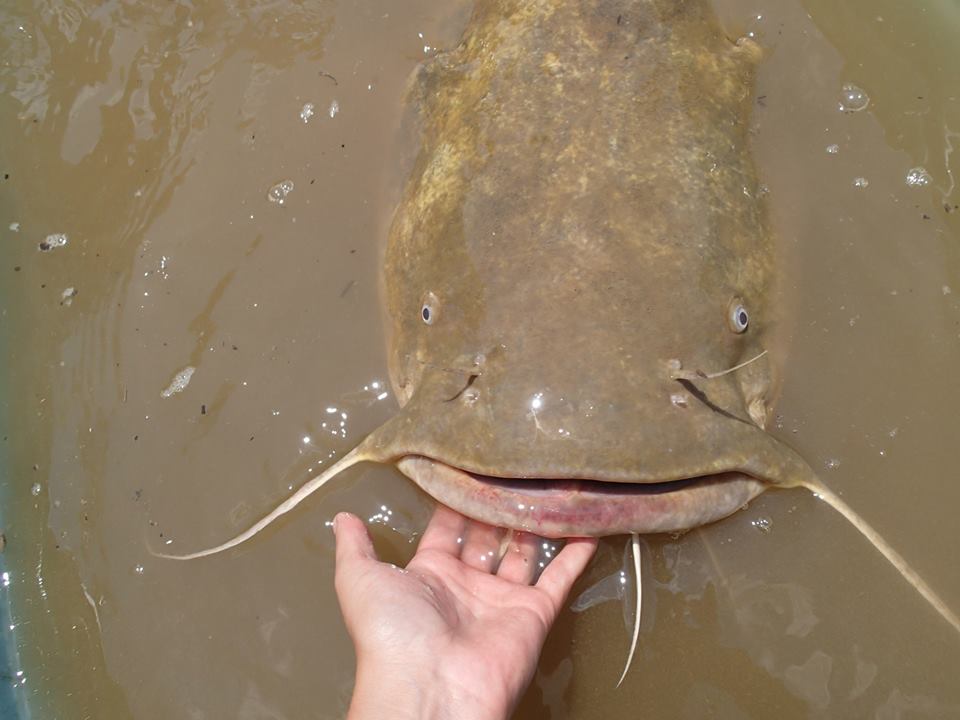 Somewhere in the Wabash River there swims a fish named after Robert Colombo, an associate biological sciences professor at Eastern Illinois University.

“Little Rob” is one of 44 flathead catfish who have been stunned with electricity, collected and surgically tagged before being released back into the 500-mile-long river that flows from northwest Ohio, across northern Indiana and along the southern Illinois border.

Anyone searching for these particular fish, however, would be advised to stay focused near the Illinois waters where EIU graduate student Sarah Huck concentrates her research.  “It’s been our experience that the fish usually continue to navigate in the same area where we found them,” she said.  “Three miles has been about the furthest we’ve tracked one of my fish.”

While it’s unlikely that the underwater creatures enjoy the treatment of being captured and tagged, Huck finds it necessary for her research.  And her studies are critical for determining the sustainability of the flathead catfish – one of the most sought-after fish in the Wabash.

“It’s a good-tasting fish, popular with both sport and commercial fishermen,” she said.  “And it’s a real aggressive fish.  It’ll give you a good fight.”

In addition to researching the large- and small-scale movements of the fish, she also studies their general behavior, along with their environment.  The proper habitat is critical for the fishes’ success.

“Our job is to determine their critical habitats, which means, in part, studying them for 24-hour periods throughout the year,” Colombo said.

And to do this, the fish must be traceable. That’s where Huck’s job began.

In order to collect her fish, Huck visited several sites along the Wabash, south of Terre Haute, Ind.  Using an electric current, she stunned the fish – “it doesn’t kill them,” she quickly adds – and collected them, placing them in aerated, water-filled tanks.  The “chosen ones” must fit certain size and weight requirements (at least 24 inches and four pounds) to properly withstand the tagging process.

(Her largest tagged fish, Huck said, weighed in excess of 50 pounds and was more than three feet long.)

Within a couple of minutes, each fish is weighed and measured, then has a small “coded ultrasonic transmitter,” similar in appearance to a battery, surgically implanted into its body cavity (near the fish’s shoulder) via a one-and-a-half-inch incision.  In addition, a separate identification tag is attached to the dorsal fin.

The fish is then put back in the holding tank and given time – five to 10 minutes – for “post-op” recovery before being placed back in the river.

“That transmitter puts out ultrasonic signals in the water that we can hear through what we call a hydrophone,” Huck said.  “The tracking equipment we use is transported via boat to various spots on the river.”

For thorough research, tracking sessions must take place at varying times during the day and night and through all four of the seasons.

Huck and a research partner – “One never goes out alone,” she said – might spend a complete night out on the Wabash.  They could be dressed in shorts and tank tops or, instead, bundled up in winter gear.

Huck can tell the story about building a snowman as they floated along the river one cold, winter day.  She’s less inclined to reveal the details leading to her rescue by the Posey County River Rescue Team after running aground during the drought of 2012.

“That one’s embarrassing,” she admits, grinning.

Les Frankland ’75, ‘77, fisheries biologist with the Illinois Department of Natural Resources, admires both Huck’s dedication and her spunk.  “She goes places where I wouldn’t even think about going,” he said.  “Just moving along, following the catfish.”

He also appreciates the professionalism with which the research is done, and is appreciative of the data that Huck shares with the IDNR.  “The flathead catfish is one of the most sought-after species in the river,” he said, “and it’s important that it not be over-harvested.

“We want to protect the species, but we also want to be able to utilize it,” Frankland continued.  “I’m pleased to say that Sarah’s research indicates that the flathead catfish population in the Wabash River is a quite healthy one.”

Huck – a self-proclaimed tom boy and “river rat,” having grown up along the Fox River near Barrington in Lake County -- never really gave much thought to fish.  Her plan upon coming to Eastern was to become a veterinarian.

That all changed with one class.

“I had to take a regular ecology class that Dr. Colombo taught,” she said.  “One day we took a trip to Polecat Creek east of Charleston), and something in me snapped.

“I kept thinking about how beautiful the fish are, and it amazed me to think about that entirely different world beneath the water.”

Still an undergraduate at the time, she immediately began helping graduate students with their research projects.  She reciprocates now by enlisting current undergraduates to help her with her own research as she strives to finish her master’s thesis.  She expects to graduate in May 2014.

Have you caught one of Sarah's tagged fish?  Please let her know... 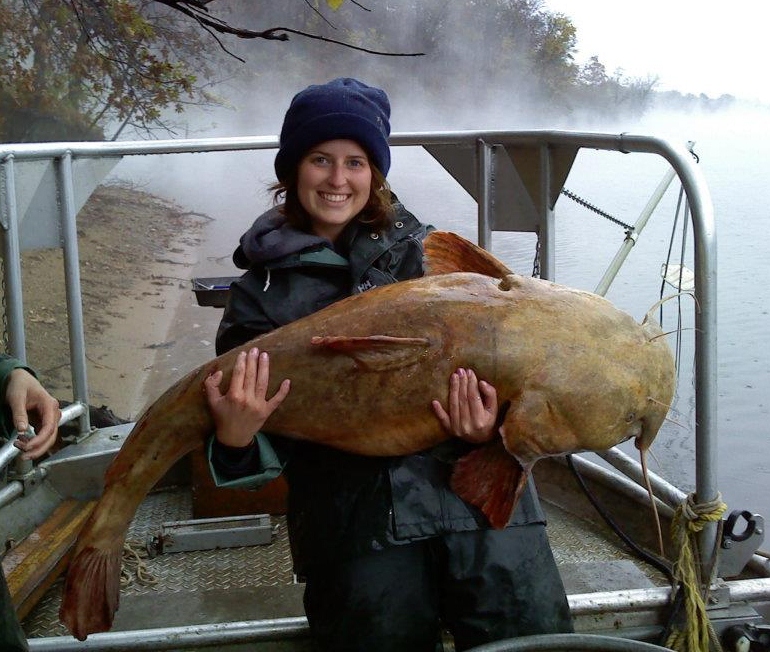 When someone catches one of her fish, Sarah Huck wants to know about it.  Please.

It’s not hard -- contact information for the university is listed on the identification tag adhered to the fish’s dorsal fin.  Folks can call EIU’s Biological Sciences Department and let them know a tagged fish has been caught.  In return, EIU will send the caller a self-addressed envelope with which to return the tag and, if at all possible, the transmitter inside the fish.

Returning the transmitter helps in two ways:  First, each fish’s capture is carefully logged, becoming yet another piece of information to be used in Huck’s research.

“I basically write a story about each of the fish – its health, where it has been, etc.,” Huck said.

Secondly, many of the transmitters can be reused.  Since each one costs about $300, that can means a huge savings for the department – and for the taxpayer.

Much of the money spent to support fisheries research at Eastern Illinois University comes from funding made possible through the federal Sport Fish Restoration Act.  This act, originally passed in 1950, places a 10 percent excise tax on fishing rods, reels, lures, fishing line and related fishing equipment.  EIU receives roughly $60,000 annually; its use, however, is controlled by the IDNR.

To date, transmitters from six of Huck’s 44 tagged fish have been returned by anglers.