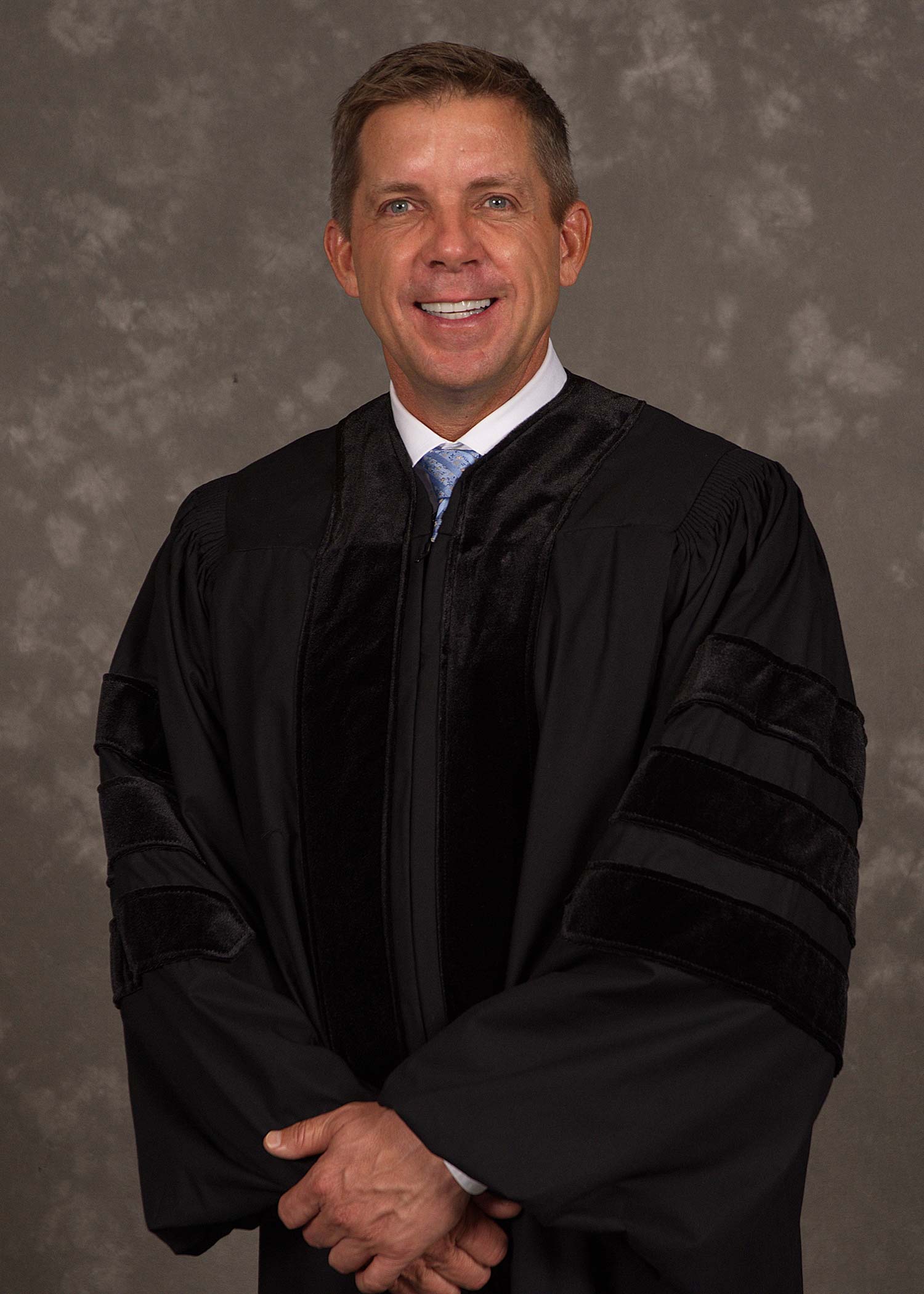 Sean Payton, coach of the New Orleans Saints, received an honorary Doctor of Public Service degree from Eastern Illinois University today in recognition of his generosity and service to society.

Payton, who received his bachelor’s degree from EIU in 1987, is the coach of the 2010 Super Bowl XLIV Champion New Orleans Saints and was the NFL Coach of the Year in 2006.  Prior to becoming head coach of the Saints, he served as an assistant coach for NFL and collegiate teams.  Payton played in the NFL, Arena Football League, and Canadian Football League.

The Eastern Illinois University Athletics Hall of Fame inductee (September 2000) played quarterback for the Panthers from 1983-86.  He was an honorable mention All-American in 1986, leading EIU to the NCAA FCS quarterfinals.  To this day, he holds four single-season records, four career records and three individual game records at EIU.

In 2010, the university retired his No. 18 jersey, and Payton was named a Distinguished Alumnus by the EIU Alumni Association.

He was honored by the NCAA in 2012 as a recipient of the Silver Anniversary Award, which annually recognizes a handful of distinguished individuals for career achievement on the 25th anniversary of the conclusion of their college athletic careers.

In August 2005, Hurricane Katrina struck the Gulf Coast of the United States.  Payton, who arrived as the Saints’ head coach in New Orleans a year later, witnessed firsthand the storm’s devastating and continuing effects on the city and region.  Believing that helping those less fortunate is not an option but, rather, a duty, he co-founded the Payton’s Play It Forward Foundation as a vehicle in which to help local children and families impacted by that storm.

The Foundation was created with the goal of raising funds and awareness for organizations fighting at the fore-front for children and families in need.  The Foundation’s assistance has addressed issues of homelessness, education, healthcare for the uninsured and disabled, domestic violence and other social welfare needs.  Since its inception, Play It Forward has donated hundreds of thousands of dollars to several local and regional charities, including the Dr. Phil Foundation, the First Responders Fund, Habitat for Humanity, the Make-a-Wish Foundation of Louisiana and many others.

Additionally, Payton has always embraced his identification with Eastern, and has returned to campus numerous times to support his alma mater, spending time with students, faculty, staff and Panther fans whenever opportunity allows.