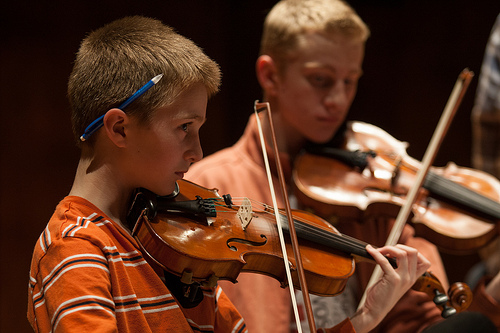 After the area's only school orchestra was cut in the 1970s, private music teacher Terry Coulton watched her young students diligently practice their craft alone, without the benefit of hearing their instruments the way they are most richly enjoyed -- as part of a symphony.

"There was a huge void," Coulton said. "Some had achieved an advanced level of playing and were ready for that next step."

On occasion, she'd get permission for outstanding young musicians to play with Eastern Illinois University's Eastern Symphony Orchestra. When conductor Richard Rossi took over the ESO in 2001, Coulton anxiously asked whether he would welcome children to his ensemble.

And so the Symphonic Honors Initiative Program, or SHIP, was born.

SHIP is a win-win-win-win situation, as it provides experience to youth who would otherwise have no opportunity to play locally; gives EIU students an opportunity to mentor children, which is particularly beneficial to those who will become teachers; serves as a recruiting tool for the EIU music department; and bolsters the size of the orchestra, which also includes EIU students, professionals and community members.

"It does my heart good to look out and see such a diverse range of experience, from these little ones whose feet don't touch the ground, all the way up to musicians in their 80s," Rossi said, describing the Eastern Symphony Orchestra's "very unique setup."

The community involvement is "positive and unifying," Coulton said.

"Everybody looks out for the younger students, and everybody respects the older people," she said.

Coulton -- whom Rossi has affectionately dubbed the "Mother SHIP" for her central role in establishing and nurturing the program -- serves as a liaison for SHIP students and parents.

"SHIP has grown over the years and has also provided us with some string majors and a major source of recruitment," Rossi said. 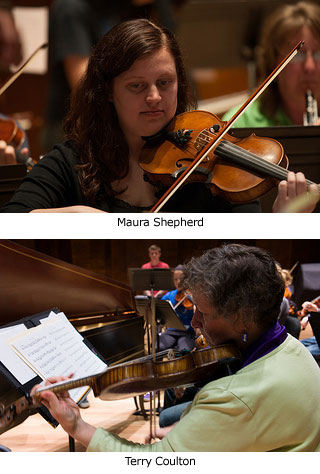 By chance, a recent piece in the ESO's Christmas concert featured solos by those three SHIP alumni. It was a proud moment for Rossi, who has guided them since they were children.

Shepherd, who has played with the Eastern Symphony Orchestra since she was in fifth grade, said that SHIP pushed her to be her best, while reassuring her that her lifelong dream of making a career of music was the right path to follow.

Shepherd has decided to become a music educator, and SHIP is now helping to give her excellent first-hand experience in teaching children.

"It's kind of like coming full circle for me," Shepherd said. "I know the overwhelming feeling of seeing these notes they don't know how to play that fast. I get to work with them one-on-one, and I can reassure them that one day, they'll be playing right along."

The interaction of EIU students and the youth is part of the beauty of the program, Rossi and Coulton agree.

"The young students see the college students working and learning in the same situation, and I think they are inspired to be just as focused and as mature as they can be," Coulton said.

The Eastern Symphony Orchestra's principal players for each section act as SHIP faculty. Before each weekly rehearsal, each SHIP faculty member meets with a section for an hour: Coulton and Sharilyn Spicknall with two violin sections; Megan Goff with violists; Ka-Wai Yu with cellists; and Todd Gallagher with bassists.

"That's an opportunity to really sit down with them and really give detailed direction, and it's a chance for the students to ask questions," Coulton said, adding that the experience is "vital" for young musicians. "I think the learning happens without them really realizing it."

"These students gain invaluable experience with a college-level ensemble, learning the orchestra music literature and the skills of following a conductor and working within a section of musicians," Coulton said. "They learn about historical styles, orchestra etiquette and performance practice, and they can see what is ahead for them in their future musical pursuits."

For more details on SHIP, including information on how to apply to participate, please visit http://www.eiu.edu/music/ensembles_eso_ship.php or call Rossi at 217-581-3111.