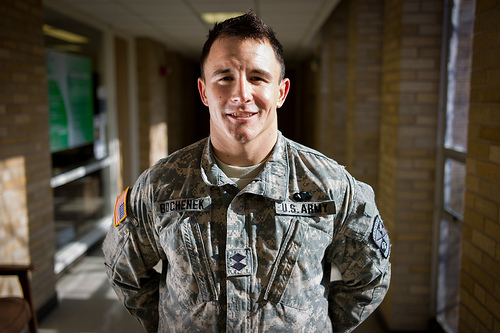 Eastern Illinois University senior Matthew Bochenek's longtime goal of becoming a military pilot is well on the way to becoming a reality.

Thanks to years of hard work, Bochenek is ranked among the top 1 percent of cadets -- No. 55, to be exact -- in the entire U.S. Army Reserve Officers' Training Corps.

Three fellow EIU cadets also made the National Order of Merit List: Steven Kutz of Holt, Mo., is in the Top 10 percent; and William Comstock of Charleston and Ryan Shumaker of Marshall are in the Top 15 percent.

Bochenek has long wanted to be a military officer, inspired in large part by stories from his paternal grandfather, who was an Army corporal in the Korean War, and his grandfather's brother, who flew a B-29 bomber in World War II.

"I flooded their brains with questions," Bochenek said. "I've always had a desire to serve."

When Bochenek was in sixth grade, his father took him to his first air show, and he was hooked, and he began attending every air show he could.

As a high school student, Bochenek decided to take flying lessons to be sure he wanted to devote his career to being a military pilot. Though he was already busy as an outstanding three-sport athlete with a good GPA, he worked three part-time jobs to earn money for the lessons, which cost more than $100 per hour. He completed 24 hours of flight time, more than enough to convince him that he loved it.

When it came time to make a college decision, he opted against attending a military academy, because he wanted the opportunity to focus equally on academics and the military, while still having the chance to enjoy social aspects of college. Eastern Illinois University stood out, in large part due to its excellent ROTC program, which was small enough to allow him to develop strong relationships with his instructors and his fellow cadets.

"I felt like ROTC was the best for me because I could live a military life and a school life as well," Bochenek said. "I like the fact that you're a student first, because you can focus on your GPA. And then you are a cadet, and you gain the experience to lead other cadets."

Bochenek has amassed a wide variety of leadership experience through ROTC, including currently serving in the program's top student position, cadet battalion commander.

"That really hit me right there that this is what I want to do," Bochenek said. "I knew I'd have to do everything it takes to make it happen."

He knew that in order to have a better chance of securing the Army assignment he wanted after graduation, he would have to do well on the national cadet ranking, which is based on combination of skill assessments, including grade-point average; physical fitness; extracurricular activities; and the score from the five-week Leader Development and Assessment Course at Fort Lewis, Wash., the pinnacle of ROTC program.

Exhibiting his usual dedication and perseverance, he worked as hard as he could to excel. "When things would get hard, I knew I couldn't stop, or I'd never be satisfied," he said.

All of the hard work paid off when he got the news that he was ranked No. 55 in the nation, allowing him to secure the assignment he'd long worked toward -- aviation officer, a highly competitive and demanding career field.

Bochenek is quick to give credit to the ROTC program and its instructors for equipping him for success.

"They gave me the right resources so I could study and pass the test," Bochenek said. "They have really high expectations of you, and they train you right. I'm very happy with all of the training opportunities."

Bochenek is not taking much time to sit and bask in the achievement of his long-time goal.

"I know that I was in the 1 percent, but that's all behind me now, and I've made it a goal to be the top in my flight school and keep going," Bochenek said.

Bochenek is on track to reach two major goals in May: earning his bachelor's degree in exercise science, and being commissioned as a second lieutenant in the U.S. Army.

Sometime this spring, Bochenek will get his orders from the Army, dictating when he'll begin flight school at Fort Rucker, Ala. After 18 months of training, he'll be assigned to an active duty unit.

His ultimate goal is to become a master aviator, serving as a company or battalion commander -- "to achieve the banner of excellence in the aviation field," he said.

There is little doubt he will fulfill that ambition. The only question is what new challenge he will dream up next.