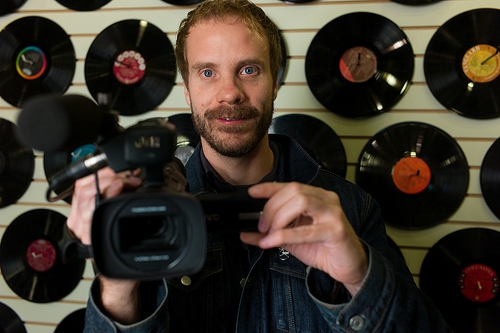 An Eastern Illinois University faculty member will screen his new documentary about the significance of an iconic independent record store on Wednesday, Nov. 7.

“I chronicle the history of (the store), the stories behind it, the social meanings of the store, how it acts as a community gathering space for local music scenes,” said David Gracon, an assistant professor in the EIU Department of Communication Studies. “These kinds of places are for more than just buying and selling music, they’re a form of community for many people -- a place where subcultural scenes can flourish and have a place to meet each other.

“The store is also situated in an old house, and there are a lot of stories about people who used to live in this house and even some ghost stories. It’s sort of an amalgamation of all these topics under this umbrella of the record store.”

Places like House of Records are becoming more and more of a rarity with the advent of digital music. The 2006 closing of a record store across the street from Gracon's childhood home in Buffalo, N.Y., inspired him to study similar businesses and their societal impact.

“There was a reaction when that store closed,” Gracon said. “It was kind of an outcry. I thought maybe I could go see what’s going on with this store (House of Records); see if it is struggling to exist as well.”

The documentary is the result of Gracon's doctoral research at the University of Oregon in Eugene. He filmed from 2006 to 2008, and then shelved the project as he devoted most of the next few years to his written dissertation.

When he joined the EIU faculty in 2011, he began the daunting task of assembling the hundreds of hours of footage into a 63-minute film.

This fall, Gracon took the resulting film back to the Pacific Northwest for showings in Eugene, Portland, and Olympia, Wash., so people could watch the film as part of a community, rather than in individual homes.

“The stores themselves are about physical space and being around people, and I felt the film tour should also be like that," Gracon said. “We had a discussion with the audience about the social significance of these stores, what local businesses mean to people, and how to preserve them and keep them going."

Gracon plans to take the documentary to film festivals, and he hopes to secure a distribution deal. In the meantime, he has already incorporated the filmmaking experience into his teaching at EIU.

“I teach video production, so I tell my students about the trials and tribulations of making a film of this nature,” Gracon said. “I always tell my students, if you’re not passionate about the work you’re making, you’re not going to have good work. I was super invested in this project; if you’re going to spend years on a topic, you have to really love it.”

In his spring Documentary Production class, Gracon showed his students the first 20 minutes of Walls of Sound, and they provided valuable feedback.

“(The students) are developing as videomakers, but at the same time, they may catch something I’m not seeing," Gracon said. "I think they like the fact that this work is being presented publicly and getting out there. I want them to do the same thing; I want them to look up to a project and feel like they can do that, too.”