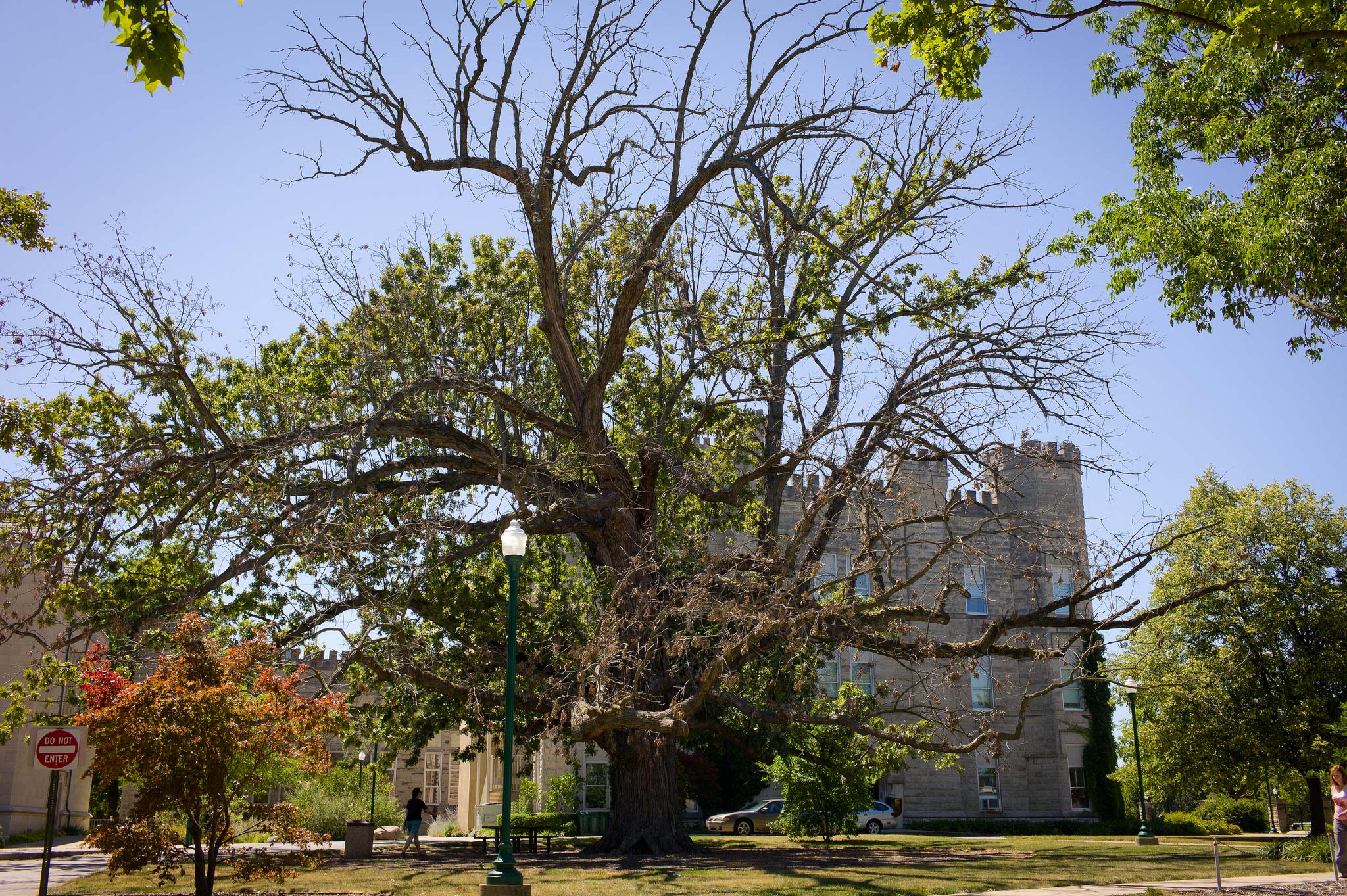 Eastern Illinois University President Bill Perry has issued a reprieve for the giant sentry which has stood guard over the campus “castle” since it was built more than a century ago.

For decades, a huge bur oak tree – estimated now to be 300 years old as evidenced by its 61-inch-wide trunk – has provided shade and shelter to students at work, at play and in love.  On warm spring days, entire classes have listened to lectures underneath its leafy branches.  Hundreds of homecoming courts, floats and bands have gathered near it, readying themselves for participation in the annual fall parades.

Romances have blossomed; friendships have flourished.  The tree is as much a fixture on campus as nearby Old Main, EIU’s administration building.

It’s no wonder, then, that hearts are already broken by the imminent demise of the stately tree.

“Retirement is inevitable,” said David Crockett, associate director with EIU’s Facilities Planning and Management.  “A significant part of the tree is already dead and will not come back.  It might last another year or it might last 10 more years.  We just can’t predict.”

Experts concur that a lightning strike nearly 10 years ago probably initiated the oak tree’s decline.  A huge scar running down the tree’s east side is a lingering reminder of that fateful day.

“Someone who saw that lightning strike said the ground shook around the tree.  So it might have hurt the root system,” Crockett said.  He noted that specialists have confirmed the unwanted presence of fungal growth on the roots.

The tree’s condition is so bad, in fact, that EIU’s administration struggled with the decision as to whether it needed to be felled completely.  Campus safety was a primary concern.

But in the end…

“The president has said, ‘Let’s not give up on it.  It has served us since the campus was built,’” Crockett said.

The reprieve is not without conditions.  Work will begin in July to drastically trim the tree in order to make it safe for the campus community.  While the branches on the west side of the tree are leafy and green, the branches on the east side are bare, brown and sickly looking.  And potentially dangerous should the damaged branches begin breaking off.

“The tree naturally balances itself,” Crockett said.  “If we take off the old, dead limbs alone, that would create abnormal stress on the trunk, and that would make the situation even worse.  So we need to balance the tree.”

The plan is to remove all limbs, living and dead, less than six inches in diameter.

“All the thin stuff comes off,” Crockett said.  “It should then be able to withstand any winter storms or high winds that might come its way.”

In addition, crews will install some kind of fencing –“nothing too elaborate, nothing too gaudy,” Crockett said – and remove the picnic table that has been a fixture under the tree for years.

In the meantime, efforts are also being made to ensure that the tree lives, and gives, on – in one form or another, including through academics.  The oak is, of course, an integral part of a university campus.

Henry Owen, EIU professor of biological sciences, is attempting to clone the bur oak – a process he says would produce individual plants that are genetically identical to the parent plant.

"Seed propagation, by contrast, would result in genetic variability in the offspring,” he said.

An earlier cloning attempt, made in Spring 2012, was unsuccessful.  Owen attempted the process with stems collected by EIU Grounds Superintendent Justin Perry.  Altogether, there were 72 cultures; however, none of them “took.”

“It’s going to be a tougher problem than we originally thought,” Owen said.  Because of the age of the tree and the particular “woodiness” of the material, it “harbors a lot of critters.  The surface was too overgrown from contaminants,” he added.

Owen said the key will be to see what can be done about getting the bacteria/fungi off the samples without killing the plant.  The next effort will begin in the fall, when Owen plans to enlist a couple of biological sciences students interested in undergraduate research to help.  They should have some idea by late fall or early spring as to whether their efforts are successful.

While cloning efforts take place on one part of campus, the university groundskeepers are attempting yet another method of tree reproduction – a method apparently considered, but perhaps not followed through on, by many over the years.

Robert F. Zeigel grew up in Charleston and graduated from Eastern in 1953.

“I recall fondly my ‘association’ with the bur oak tree on the eastern aspect of Old Main,” he once wrote, recalling the years of his youth.  “My Cub Scout/Boy Scout buddies and school mates played marbles or mumbly peg under its branches.

“On balmy spring and fall days and, indeed, during the warmer summer sessions in elementary school, the teachers would bring us outdoors where we would sit in the copious shade of the bur oak and listen to stories, or receive instruction.”

Zeigel added that he and his father, William H. Zeigel, once an EIU administrator, frequently walked together to and from school.

“As we usually entered Old Main from the eastern entrance, we passed by the bur oak, which usually generated a glance or a comment regarding its seasonal leafy garb.  Just why, through all those years, it never occurred to me to attempt to germinate some acorns from this tree, I cannot explain – possibly because I thought that it would always be there, with a permanency that would transcend many human life spans,” Robert Zeigel wrote.

Perhaps urged on by the tree’s decline, the idea did occur to Justin Perry.  Approximately 50 acorns were collected directly from branches of the old oak in the fall of 2011.

“We picked them off the tree before the squirrels got them – a hair, perhaps, before they were ripened all the way,” he said.

The acorns were then planted in pots with nutrient-enriched compost; the pots, in turn, were stored in a protected campus area where deer and rabbits couldn’t get to them.

“We have about 31 seedlings,” Perry said, noting that was “a good return” on what had been planted.  “The largest is about a foot tall.”

Of course, regardless of the method of growth, the next question to be answered is what to do with any of the old oak’s offspring.

“Possibilities include sales to alumni, students and other interested folks,” Owen said.  “Or we can plant one and ultimately replace the old tree in the same location.”

Crockett suggested that the “certifiable ‘Sons and Daughters’ of the old oak tree” could be planted across campus at various sites where they could be enjoyed “for another 300 years.”

As for the old oak itself…

“We won’t give up on the tree until absolutely necessary, and even then the tree may be able to give to artists, the community and the university with its repurposed wood,” said President Bill Perry.

William Weber, vice president for business affairs, said many have sent messages and emails with suggestions for any wood harvested from the old oak.

“We appreciate these suggestions and will take all of them under consideration,” he said.

“A lot will depend, however, on the condition of the wood once it’s cut and what we see when we examine it.  We’ll just have to wait and see.”