EIU Mourns Loss of One of Its Greatest Supporters, Burnham Neal 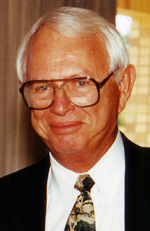 Eastern Illinois University has lost a great friend with the passing of Burnham Neal. On behalf of the entire EIU community, I express sincere sympathy to the family and friends of Mr. Neal, whose overwhelming generosity made a positive difference in so many lives.

Mr. Neal and his late wife, Nancy, were among the biggest financial supporters in the university's history. In fact, the Neals were so representative of the spirit of leadership, dedication and generosity that EIU named its annual Philanthropy Awards after them in 1997. Mr. Neal received an honorary Doctor of Public Service from EIU in 2003.

The Neal family's biggest and most prominent gift to EIU was the $2 million Neal Welcome Center, which has greeted visitors entering Charleston from Illinois Route 16 and Interstate 57 since 2002. It also houses offices for the EIU Foundation and the Office of Philanthropy.

As an astute businessman, Mr. Neal recognized the importance of EIU to Charleston and the surrounding region, knowing that his contributions would have a significant return on investment in the form of enhancing the quality of life of the residents of east-central Illinois. The impact of his gifts is incalculable, and we will always be grateful for his forward-thinking generosity.