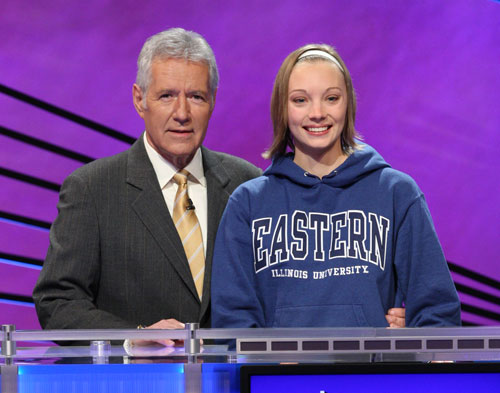 Eastern Illinois University will be in the national spotlight when one of its Presidential Scholars competes for $100,000 on the "Jeopardy! College Championship" on Feb. 2.

Anne Rozek, a junior from Cary, was one of 15 students from throughout the nation chosen for the game show, putting EIU on the same stage as schools including Duke, Harvard, Stanford and Columbia.

Rozek, who can't discuss how she fared on the show until after it airs, said the entire experience was surreal.

It all began with the encouragement of a family friend who was once a five-day "Jeopardy!" winner and competitor in the show's Tournament of Champions.

So, during spring break in March, Rozek and her older sister each took the online test.

"We had to take it at our local McDonald's because we only have one ethernet connection in my house, so that was interesting," Rozek said.

She did so well that in May, she was one of 300 people invited to audition in person. She traveled to Kansas City, Mo., to take another test, complete a personality interview and play a mock round of "Jeopardy!" complete with buzzers.

In early December, she received the call that she'd made the final cut and would travel to Los Angeles in early January. She "sort of kept it on the down-low," but that changed when her mom, Jane -- an EIU graduate -- came to campus to pick her up for winter break.

"She literally marched into President Perry's office and said, 'This girl's gonna be on "Jeopardy!" so I think you need to do something about that,'" Rozek recalled with a mixture of amusement and embarrassment. "He was just like, 'Well, I guess we need to set you up with some stuff, then!'"

The timing of her "Jeopardy!" invitation -- just before final exams -- added even more stress to a time already filled with extensive studying. She devoted one or two hours per day, "but nothing too extreme," to studying for the show.

Her "Jeopardy!" preparation included studying books with a wide range of facts, like "The World Almanac," and books geared toward specific subjects that the geography major felt weren't her strong suits, including "Literature for Dummies" and "Art History for Dummies." She also surfed the Web for information and, of course, watched "Jeopardy!"

"I'm a nerd. I watch it pretty much every weekday that it's on, or at least I try to," Rozek said. "That's something that I found I had in common with the other contestants. We found that we could all literally talk about 'Jeopardy!' players by name, and how many days they'd been on, and who annoyed us, and who we wanted to do well."

Her father, Dan, accompanied her to Los Angeles for the taping, and her mom opted to stay back home in Cary.

The filming process was a long, tiring ordeal, Rozek said, explaining that the 20-mile car ride from the hotel to the studio took an hour, followed by more than five hours of signing paperwork, getting hair and makeup done, filming a short interview for the show's website, taping promos, and playing two practice games in the studio "just to sort of get a feel for things."

"About 15 minutes before you're set to start taping, they'll walk into the green room where the contestants are and be like, 'OK, you three -- you're up, you have to go,'" Rozek said. "So it's really nerve-wracking, just sitting back there wondering when you're going to go and who you're going to play against and what they're going to ask."

Then, she walked to the place most "Jeopardy!" fans can only dream of seeing in person. 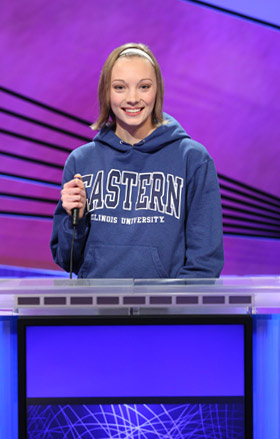 "Standing behind the podium and seeing the lights and the board -- it was crazy. It was absolutely insane," she said.

Rozek enjoyed meeting host Alex Trebec, and she appreciated his use of funny anecdotes to break the tension during the match, "because we were all nervous as could be."

And what about those buzzers that contestants always seem to blame for their "Jeopardy!" woes?

"They aren't pretending that their buzzers aren't working correctly," Rozek said. "Those buzzers are tricky, let me tell you. They are not easy."

Now, the hard part is keeping the outcome under wraps. Word of her "Jeopardy!" experience has been making its way through campus, though, and it has already brought some perks, including an invitation to meet EIU alumnus Tony Romo (now famous as the Dallas Cowboys' quarterback) at the EIU Athletic Director's Gala on Feb. 14.

But for the most part, she's kept to her regular schedule, which is full of classes, two on-campus jobs and extracurricular activities (including leading campus tours for prospective students) -- and, of course, watching "Jeopardy!"