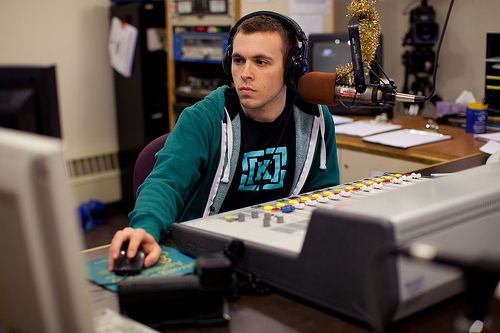 Korey Adkins, a senior communication studies major from Mattoon, was one of more than two dozen students in Mike Bradd's "Broadcast Announcing" class, assigned the task of producing a radio public service announcement promoting the Cell Phones for Soldiers Project.  The project encourages the public to donate their old cell phones, which are then converted into calling cards that are distributed to military members serving around the world.

"It was a class assignment first and foremost," Adkins said.  "But we were given the option of submitting it into the contest."

That contest - the Fall 2011 Best New Ad Radio Competition -- is a partnership between education and business communities.  Companies assign projects in which students are challenged to create the "Best New Ad."  This year's competition challenged students from around Illinois to produce radio public service announcements promoting the Cell Phones for Soldiers Project.

Upon receiving the assignment, Adkins began by researching the organization, identified his target audience, then wrote the copy and chose the music/sound effects he wanted to use.

"It took a few attempts," he admitted, noting that he wrote three or four different scripts before he was satisfied with his work.  In fact, he developed the version he was happiest with the very day the assignment was due in class.

His hard work and dedication paid off.

A few weeks later, Adkins was notified that his 30-second radio spot was chosen from among 33 entries collected from more than 22 colleges and universities.  In addition to the first-place prize of $300, Adkins may have his radio PSA used by Cell Phones for Soldiers during its 2012 national campaign.

Adkins, who has gained practical experience by working at Hit-Mix 88.9 (WEIU Radio) for the past three years, has also been enrolled in several radio classes as part of his major.  And he's enjoyed the experience, he says.

"However, I haven't really committed myself as to what I'll be doing after graduation," he said.  "But this award affirms that I can do well at radio production should that be what I choose to pursue."

Bradd, too, was pleased with the announcement of his student's award.  The news was especially pleasing, given that it's the second consecutive semester in which an EIU student has been a finalist in a Best New Ad contest. In Spring 2011, Monica Becker of Bartlett, Ill., was a finalist for her radio public service announcement promoting the Donate Life Illinois organ donation program.