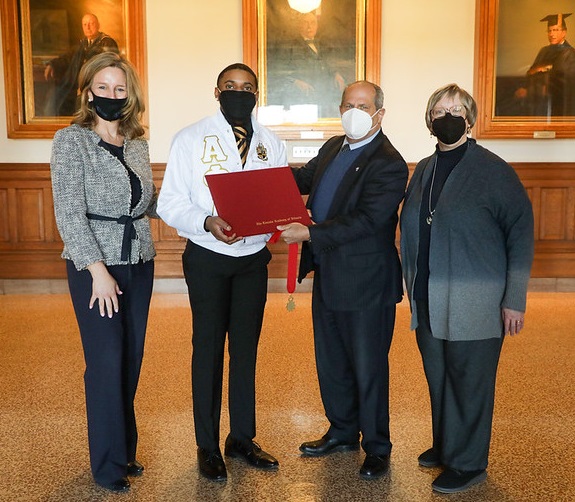 PHOTO CAPTION: From left: Vice President for Student Affairs Dr. Anne Flaherty celebrates Lincoln Academy of Illinois Student Laureate honoree Jerimiah Boyd-Johnson along with EIU President Dr. David Glassman and nominator Dr. Melinda Mueller, professor and department chair of political science at EIU. Illinois Student Laureates are honored for their leadership and service in the pursuit of the betterment of humanity and for overall excellence in curricular and extracurricular activities.

Boyd-Johnson is a member of EIU’s Forensics Team and a member of the EIU chapter of Alpha Phi Alpha, the first intercollegiate historically African American fraternal body focused on promoting leadership through brotherhood. He is majoring in political science with a minor in pre-law and anticipates graduating EIU this spring.

“I’m extremely honored to have been selected as a 2021 Laureate,” Boyd-Johnson said. “EIU has provided me with so many avenues for success, and this recognition only emphasizes the amazing things that can happen when ambition meets opportunity.”

“Jerimiah’s empathy and integrity can be seen through his passion for addressing systemic racism and poverty,” said Dr. Melinda Mueller, the EIU professor and department chair of Political Science who nominated Boyd-Johnson for the award. “He understands that political participation is central to problem solving and his values continue to be his guide for impacting positive change.”

Mueller also noted in her recommendation letter that Boyd-Johnson is an outstanding student who received two notable awards—the political science department’s prestigious Connelly Scholarship, honoring his commitment to service, and earned second-place co-recipient recognition in Booth Library’s “CSI Pitch Competition,” in which he delivered a proposal for EIU to join the State Department’s Diplomacy Lab program.

Each fall, an outstanding senior from each of the four-year degree-granting institutions of higher learning in Illinois is awarded the title of Student Laureate of The Lincoln Academy of Illinois. In the spirit of Lincoln, Student Laureates are honored for their leadership and service in the pursuit of the betterment of humanity and for overall excellence in curricular and extracurricular activities.

Since the program’s inception in 1975, more than 2,000 Illinois students have been honored as Lincoln Laureates. According to the organization’s website, each recipient is selected “to honor individuals whose contributions to the betterment of humanity have been accomplished in or on behalf of the State of Illinois, or, whose achievements have brought honor to the state because of their identity with it, whether by birth or residence, or by their dedication to those principles of democracy and humanity as exemplified by the great Illinoisan whose name we bear.”