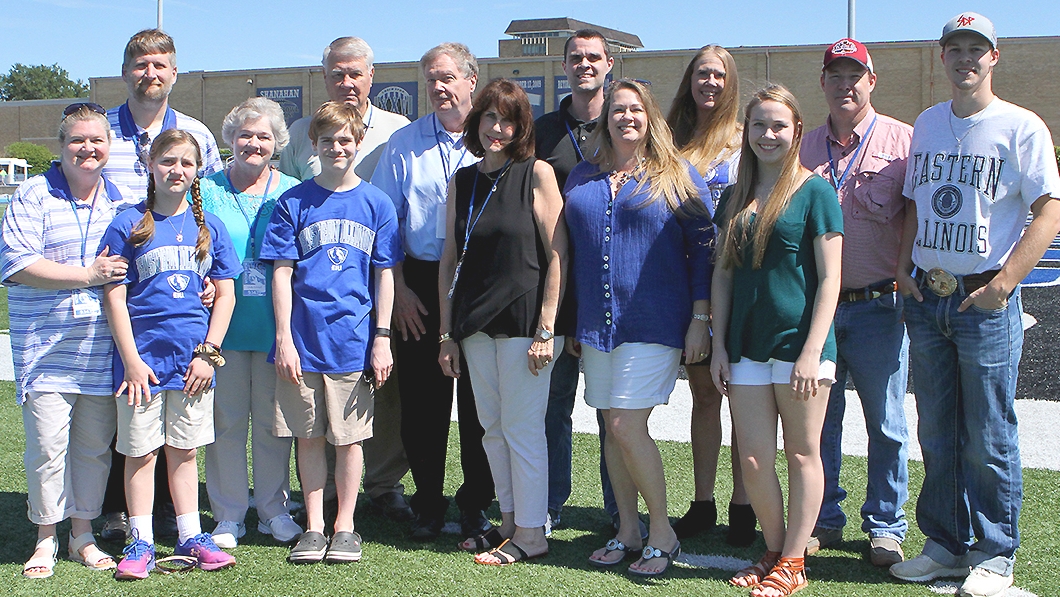 (Charleston, IL) – Eastern Illinois University is celebrating its ongoing relationship with the Schnorf family after receiving a gift from family members and friends that will allow EIU to remodel space in Eastern’s O’Brien Stadium, and to rename it in appreciation of the family’s longtime support.

Through generous donations from members of the Schnorf family and a handful of their close friends, the newly branded Schnorf Family Victory Suite at O’Brien Stadium will receive a variety of upgrades and enhancements, including a new air conditioning system, custom-designed seating and tables, a complete bar, new tile and carpeting, window coverings and blinds, television monitors, and EIU-themed wall graphics. The space has provided a special game-day experience for EIU dignitaries, guests and donors for more than four decades.

“Eastern Illinois University is thrilled to partner with such loyal EIU friends and advocates to enrich this wonderful space in O’Brien Stadium,” said EIU President Dr. David Glassman. “The Schnorf Family Victory Suite will create a charismatic and energetic atmosphere and an exclusive game-day experience for EIU friends and supporters. The Schnorf family has my deepest gratitude for their commitment to EIU Athletics, and for the family’s robust legacy as enthusiastic champions of Eastern Illinois University.”

Members of the Schnorf family are proud of their longstanding association with EIU, and equally proud of their multigenerational alumni status with the university. Burl Schnorf and Marjorie (Baker) Schnorf had four sons—Steve, Dave, Marty, and Jim—all of whom attended the Buzzard Lab School and went on to earn degrees from EIU. Burl was a foreman at the local Brown Shoe Company for many years, and passed away in 1986. Marjorie was a 1935 graduate of the Eastern Illinois State Teachers College (now Eastern Illinois University) and a long-time English teacher at Charleston High School. Her family endowed a teaching scholarship at EIU in her honor after her death in 1995. The EIU Sports Hall of Fame is named in honor of the Schnorf brothers’ uncle, Merv Baker—also an Eastern graduate and noted athlete and coach.

Steve earned two degrees from EIU in 1966 and 1973, and served as a senior official first for the Illinois Secretary of State’s office, then subsequently as a senior Cabinet officer for two Illinois Governors before retiring in 2002. He continued his political service work thereafter, being appointed to various boards and commissions, including serving as Chairman of the Illinois Liquor Control Board until his death in 2017. He received the Distinguished Alumni Award from EIU while serving in the Governor’s office.  His wife Jane Elmore graduated from EIU in 1972, and established a student emergency fund at the university in honor of her late husband. She also established a scholarship to honor her mother, another Eastern graduate.

Dave graduated in 1968 and served as a sales manager for many years in the oil, gas and chemical industries, primarily in Texas and surrounding states. He passed away in 2018. His wife Cindy (Williamson) also attended EIU. Dave and Cindy’s daughter Jamie Barge was instrumental in working with Sandy King and other Eastern personnel to compile the history of the family’s association with the university.

Marty earned degrees from Eastern in 1974 and 1980, and was a member of EIU’s track team. He retired in the spring of 2019 from Lake Land College, where he served for many years as a Correctional Career Technology Instructor at the Vandalia Correctional Center.  He coached Charleston- and Mattoon- area youth baseball, and subsequently Olympic weightlifting, for 50 years. During his coaching career, he produced numerous undefeated baseball teams and multiple national weightlifting champions who set dozens of American records.

Jim graduated from EIU in 1976 before earning an M.B.A. from the University of Illinois in 1985.  He is the Founder and President of Wall Street Strategic Capital, a financial consulting firm that advises major institutional investors and asset managers globally. Five current and former partners in his company attended Eastern, including the former head of day-to-day operations at the New York Stock Exchange and the former Deputy Undersecretary of Defense for former U.S. President George W. Bush.  He has served on numerous boards at Eastern, and received the Distinguished Alumni Award from EIU in 2007.  Jim’s wife Karen (Guckert) is also an alumna.

The university plans to complete renovations on the Schnorf Family Victory Suite by late fall. For more information on the project, contact Mike Murray at mkmurray3@eiu.edu.