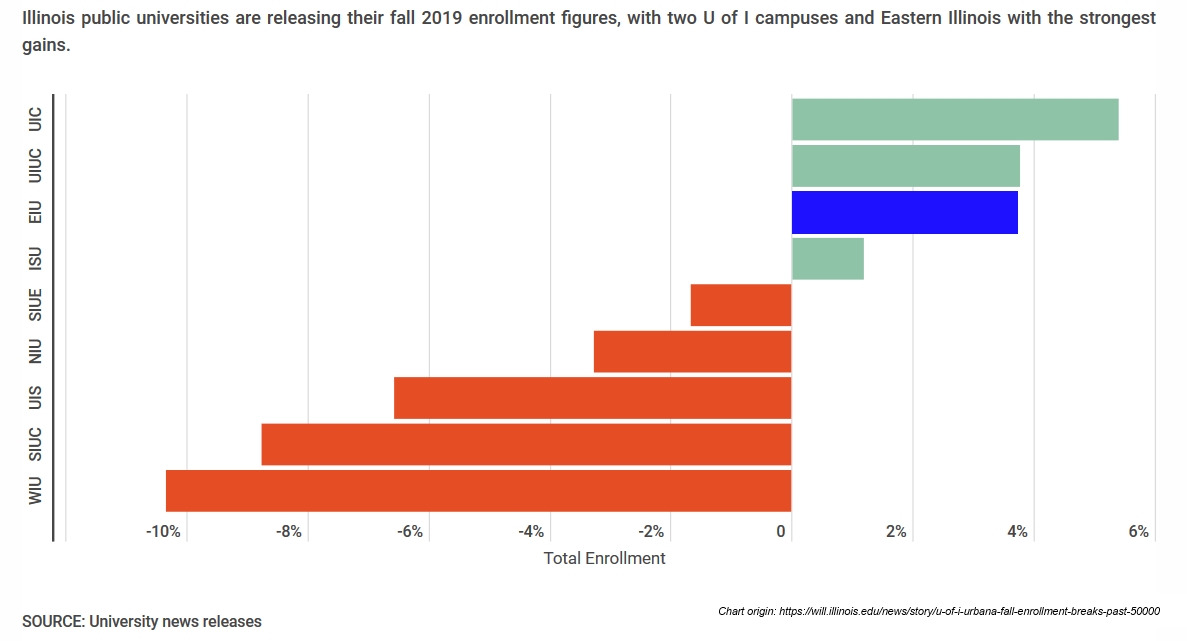 (Charleston, IL) – Two weeks into its fall semester, Eastern Illinois University’s campus is once again bustling with activity—thanks in large part to another year of increased enrollments and a growing on-campus student population.

In addition, the academic profile of EIU’s incoming freshmen and transfer students—which are based on the GPA and ACT/SAT scores of EIU’s incoming students—once again increased from the previous year. The university also saw a moderate rise in students enrolled in its Jack and Sandra Pine Honors College. Historically, students demonstrating higher academic profiles, or who are enrolled in the university’s high-level honors programs, help to further enhance Eastern’s already-celebrated reputation for above-average retention and graduation rates.

“Once again, our freshman enrollment numbers have been phenomenal,” Norman said. “We’ve seen an unprecedented 48 percent increase in first-time freshmen who live within a 60-mile radius of campus. Clearly, EIU is reinforcing its reputation as a first-choice option for higher education in Illinois, and doing its part to keep Illinois’ best and brightest students right here in their home state.”

Norman also shared that EIU’s significant freshman class enrollment will help the university to continue to replenish what have been large, outbound graduating classes.

Gatrell noted that these programs are highly advantageous because they reduce student costs and accelerate degree completion rates. In addition, he said, EIU’s dual-credit options serve as strategic, efficient onramps for students who eventually plan to live and learn on EIU’s Charleston, Illinois campus.

Earlier still, Eastern’s fall 2017 to fall 2018 first-time freshman class grew by 24.5 percent, supporting an overall enrollment increase of 7.1 percent in fall 2018. That was supplemented by another enrollment jump in spring 2019, when Eastern officials celebrated another seven percent increase.

Dr. David Glassman, Eastern’s president, said he’s proud of the work everyone at the university has done to support EIU’s reputation as a premier institution of higher education in the Midwest. In a recent email to employees, Glassman applauded Eastern’s outstanding faculty and staff, sharing that “Your passion, coupled with the tireless work of our phenomenal Admissions and Enrollment Management teams, is a prevailing reason why EIU remains a first-choice option for higher education in Illinois, and for the growing interest and reputation of our programs and services across east central Illinois and throughout the state.”

For more information about EIU, or to explore its growing assortment of programs and services, visit the university’s website at www.eiu.edu, or call EIU’s public information office at (217) 581-7400.