“Along came Eastern”; Parker Valentine credits EIU with putting his life on a positive trajectory 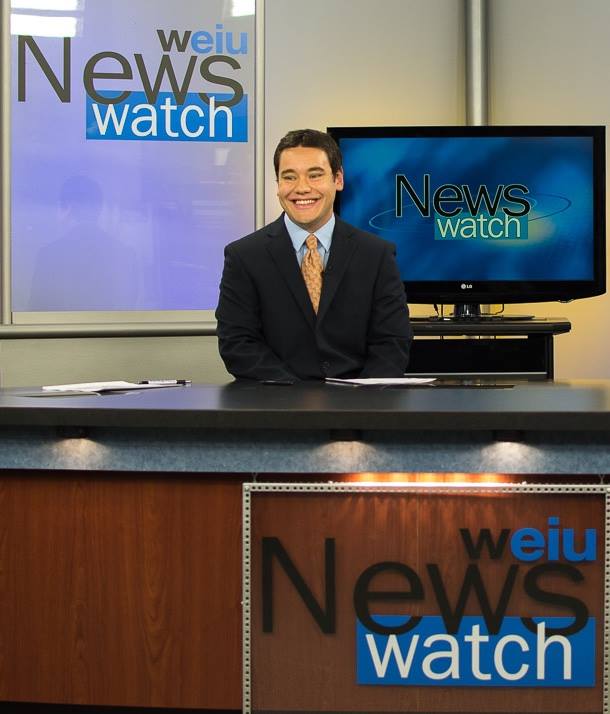 [Kaitlyn Will contributed to this article]

(Charleston, IL) – Parker Valentine is a twenty-five-year-old junior at Eastern Illinois University. Majoring in journalism and minoring in history, he has been working at the university’s award-winning TV studio, WEIU-TV, since his first day of classes at EIU nearly two and a half years ago. Today, he says, he is ready for whatever opportunities or obstacles life might throw his way, and for that, he has Eastern Illinois University to thank.

However, before enrolling at Eastern, Parker hadn’t conveyed such an optimistic outlook. Growing up, he struggled with an assortment of challenges. Personal hardships and family conflict led to what he admits was academic apathy and an absence of personal accountability.

Parker, who is originally from Brooklyn, New York, saw his parents divorce when he was 10 years old. He and his mother moved to the suburbs of Atlanta, where he remained for the next two and a half years before eventually moving to Chicago to be with his father. Parker attended high school in Chicago, and he admits it wasn’t the best experience.

“All through high school, I was always trying to impress others, and that led me to focus more on them than I focused on myself,” he said.

“It was cyclical…the more negative attention I got, the more I tried to outdo it the next time.”

When Parker graduated from high school, his family didn’t have the money to send him to college, and he wanted a fresh start. Like so many people in that position, he entered the workforce. He took on some service jobs in different industries, but observed a disturbing trend.

“I noticed some disappointing parallels while working those jobs,” Parker said. “It was like revisiting high school…people were treating each other very poorly, and were generally unconcerned with how their actions and behaviors might impact others. I decided creating a better life for myself would be entirely up to me.”

For the first time, Parker began taking himself and his future more seriously. He started saving money to continue his education. He felt a strong draw toward journalism, but still wasn’t sure exactly where he wanted to be.

“Along came Eastern Illinois University,” he said, smiling, before adding “…and I’ve never looked back.”

“I knew I wanted to be in journalism, writing for the newspaper or working for the radio or television stations,” he said. “I was drawn to EIU because of its strong journalism department, and the opportunities EIU could offer for almost immediate, hands-on learning.”

When he arrived on Eastern’s campus in 2016, Parker immediately took a student position in the television studio, where he has worked diligently in different roles for the past two and a half years.

“The first year was intense—full of excitement and opportunities that just confirmed EIU was the right place for me to learn and thrive.”

In his first year, Parker’s roles at WEIU-TV included camera assistant, video editor, and videographer. After picking up those skills, he transitioned to videography, all the while continuing to study the industry and picking up supplementary workplace–relevant skills. After some additional field training, Parker became a primary reporter and anchor for the station.

Today’ Parker’s been reporting and anchoring for just over a year and a half. He’s covered everything from EIU events and athletics to local elections and crime.

Parker credits his current success to a number of things. Certainly, he says, his past experiences are a critical part of his growth. He claims his background has given him the strong will needed to report on darker events, as well as the ability to converse with people from all walks of life—something he says “really helps me in the field.”

Of course, Parker also gives credit to EIU. Eastern, he says, has given him the academic theory, the technical know-how, and the personal confidence to successfully prepare him for his future. Throughout his time at Eastern Illinois University, he found a mentor in Kelly Goodwin, news director at WEIU News Watch. Parker also said that EIU’s overall environment is a stark contrast to his old jobs, where “everybody was out for themselves. At EIU, everyone knows me by my name; everyone asks me how I’m doing, and it’s because they really, deeply care. I can’t even begin to name all of people who have helped me since I first arrived on campus.”

Besides helping him make good friends and great connections, Parker credits the Journalism Department for giving him the industry and people skills he needs to be successful after college. He says he has learned so much about producing, writing, reporting, editing—all transferrable skills, and all immensely important in the world of broadcasting.

Most importantly to him, though, EIU helped Parker turn his entire life around. In his own words:

“EIU saved my life. EIU saved my career. My life was in a dead-end spiral before I got here, and now, I have career aspirations. When I worked in the city, I just wanted to know how I was going to make enough money to make it on my own. Now I’m actually confident that one day I can be an influential voice, and that’s because of EIU.”

According to Parker, EIU is his home—it always will be, even after graduation. “I wouldn’t want to have gone to college anywhere else.”