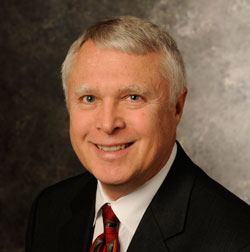 (Charleston, IL) – Eastern Illinois University alumnus Paul J. Ward has been elected to membership in the Fellows of the Texas Bar Foundation.  Fellows of the Foundation are selected for their outstanding professional achievements and their demonstrated commitment to the improvement of the justice system throughout the state of Texas. Election is a mark of distinction and recognition of Ward’s contributions to the legal profession.

Ward, who graduated from Eastern Illinois University (B.S., 1971; M.A., 1974), went on to earn a juris doctorate degree from the Southern Methodist University School of Law (1975). He has been admitted to practice law in Texas, Arizona, South Carolina, Indiana, the District of Columbia, and the U.S. Supreme Court. He served as president (1996-97) and as a member of the Board of Directors (1988-92 and 1993-98) of the National Association of College and University Attorneys (NACUA). In 1993, he established NACUA’s electronic discussion list, NACUANET, which has more than 2,600 participating members in the United States and 12 foreign countries. In June 2000, he received the prestigious Distinguished Service Award from NACUA. He served as a member of the NCAA General Counsel Advisory Board from 2000-10. Also, he has served in the American Bar Association House of Delegates. In 2002, he received the Thomas S. Biggs Award at the Stetson University College of Law, National Conference on Law of Higher Education. Ward is a member of the Texas General Counsel Forum.

Selection as a Fellow of the Texas Bar Foundation is restricted to members of the State Bar of Texas.  Each year the top one-third of one percent of Texas attorneys are invited to become Fellows.  Once nominees are selected, they must be elected by the Texas Bar Foundation Board of Trustees.  Membership has grown from an initial 255 Charter Members in 1965 to more than 9,500 Fellows throughout Texas today.