EIU Foundation Announces Whittenbarger as 2017 Annuitant Ambassador of the Year 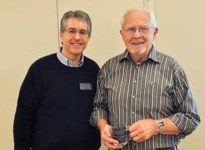 The Eastern Illinois University Foundation has named Robert L. “Bob” Whittenbarger as its 2017 Annuitant Ambassador of the Year.

Many EIU annuitants—or retirees—serve as volunteer ambassadors at the university’s nearby Neal Welcome Center, assisting the many visitors and guests. EIU students also visit Neal Welcome Center, most often to complete paperwork to finalize their most recent scholarships. In recognition and appreciation of those who have shown exemplary service and dedication to the university’s student and community efforts, the EIU Foundation Board recognizes one annuitant ambassador annually.

According to the Foundation’s selection committee, Whittenbarger, of Charleston, was a unanimous selection. Foundation representatives have shared that Whittenbarger is an ideal and longstanding volunteer for more than 5 years.

Documents shared by the committee note that Whittenbarger “has provided an outstanding level of service and has been great at helping greet students and visitors. He is also very involved in the Annuitant’s Association and helps promote our volunteer program. We’re glad to have him represent EIU at the Neal Welcome Center and in our surrounding communities.”

Whittenbarger was born in Anderson, Indiana in 1936. He earned a variety of degrees in liberal arts, economics, sociology, earning his terminal Ph.D. in Sociology from the University of Wisconsin in 1974. He’s taught all over the world, including as an assistant professor, professor and chair of EIU’s Sociology and Anthropology Department from 1981-2000. After retiring in 2000, he became a member of the EIU Alumni Association and served as its vice president and president at different times from 2000-06. He’s been actively involved in Habitat for Humanity, and he also enjoys amateur radio and politics.