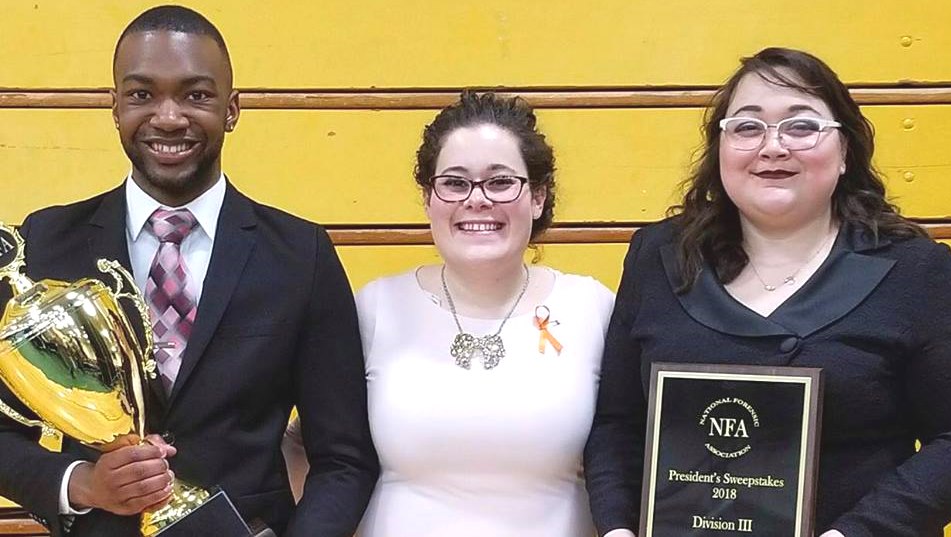 College competitive speech is a competitive co-curricular activity in which college students must research, write, and fully memorize 10-minute speeches to present to audiences. The goal of every competitor is to advance to the final round at a local tournament—and that’s exactly what EIU has done for the past two years.

Last March, the team traveled to the University of Nebraska-Lincoln, the host institution for the National Speech Championship to participate in the 2018 annual tournament. According to Sara Gronstal, EIU’s director of forensics, this year’s tournament was about 70 percent larger than the previous year, and significantly more challenging. Still, EIU’s team performance captured the 12th spot, besting some of the nation’s state flagship universities in the process.

“Considering EIU was competing against so many other, larger teams, our students represented Eastern remarkably well,” Gronstall said.

Specifically, Cheyenne Flores, a junior from Sandwich, IL became a national quarter-finalist in Dramatic Interpretation. Meanwhile, Edwyn Mitchell, a junior from Flossmoor, IL and president of the EIU speech team, successfully defended his 2017 NSC National Championship in Persuasive Speaking with another first-place performance. Mitchell also placed third in the nation in Poetry Interpretation and was a national quarter-finalist in Informative Speaking.

Following their performance in Nebraska, the team traveled to the University of Wisconsin-Oshkosh in April to participate in the National Forensics Association’s national tournament. There, Mitchell once again dazzled the judges with his oratory expertise.

“I did feel quite a bit of pressure to perform well at nationals, but my competitive drive and the drive of the team and our coaches is what really kept me focused on success,” Mitchell said. “That competitiveness gave me a drive to win, which I’m sure will only grow next year competing as a senior.”

For Mitchell, his championship performances in persuasive speech are more than a simple endgame. He knows that with award-winning powers of persuasion also come great responsibilities, and he’s preparing for what that future may look like for him.

“I aspire to be a great leader whose speaking skills can inspire and create at least some level of positive social change,” he said. “Competitive speech has given me an opportunity to conduct amazing research, share my perspectives, and advocate for the things that are important to me, and that won’t stop simply because I’ve earned a degree.”

Upon graduating, Mitchell plans to pursue a master’s degree in public administration. That way, he says, he’ll have the platform he needs to use his voice as a medium for social change, regardless of his career path.

“I chose to come to EIU for the experiences I could have and create here, and the university has been an instrumental part of my own growth and success,” Mitchell said. “For anyone wanting to do great things, in competitive speech or otherwise, take a look at what Eastern has to offer and know that here, your dreams will be supported and you can do whatever you set your mind to.”