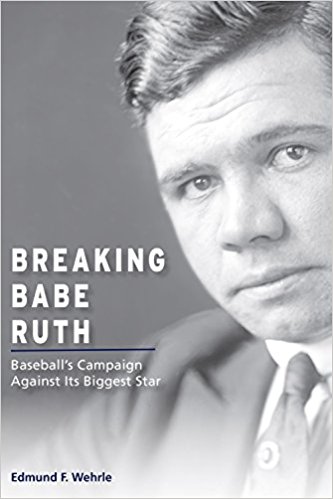 Eastern Illinois University history professor Dr. Edmund Wehrle has a new available, which may help to revise how history—and how Major League Baseball—views one of the sport’s most charismatic personalities.

Breaking Babe Ruth: Baseball’s Campaign Against Its Biggest Star makes a case that for far too long, baseball hero Babe Ruth has been viewed as a clownish figure—blessed with athletic power but limited in intellectual acumen. In the book, Wehrle demonstrates how the baseball establishment worked hard to depict Ruth in those terms, but that in truth “The Bambino” was an ambitious, independent operator, and one not afraid to challenge baseball’s draconian labor system.

“It’s actually kind of a revisionist history of Babe Ruth and baseball in general during the early twentieth century,” Wehrle stated in an email. “To the baseball establishment, Ruth’s immense popularity represented opportunity, but his rebelliousness and potential to overturn the status quo presented a threat. Hence professional baseball’s campaign to diminish the Babe and its work to minimize his contributions to the sport.”

Wehrle specializes in the history of American international relations, and much of his research and publications have focused on the efforts of trade unions to organize workers globally, especially in Southeast Asia. He teaches courses that stress politics, economics, social history, and international relations, as well as serving as the History Department’s graduate coordinator. His book is currently available on Amazon.com and other major retailers.