Eastern Illinois University’s annual Tribute event recognized a variety of student scholarship recipients, and celebrated the many donors who made those scholarships possible.

The event, held in early April, celebrated those students who are currently taking advantage of at least one of the more than 600 scholarships the university offers students on an annual basis. In addition, the 2018 event highlighted the lifelong contributions of Dr. Harry and Gladys Frost and Paul Snyder, who were presented with the EIU Foundation’s 2017 Burnham and Nancy Neal Outstanding Philanthropist Awards for their ongoing contributions and support. Both Dr. Frost and Snyder are alumni of EIU.

“The critical contributions of these valued EIU advocates and friends are appreciated beyond measure,” said Jonathan McKenzie, executive director of the EIU Foundation. “Their leadership and philanthropy has propelled the success of countless EIU students over time, and their commitment to this university ensures their legacies will be celebrated in perpetuity by the EIU Foundation and the students we continue to assist on its behalf. 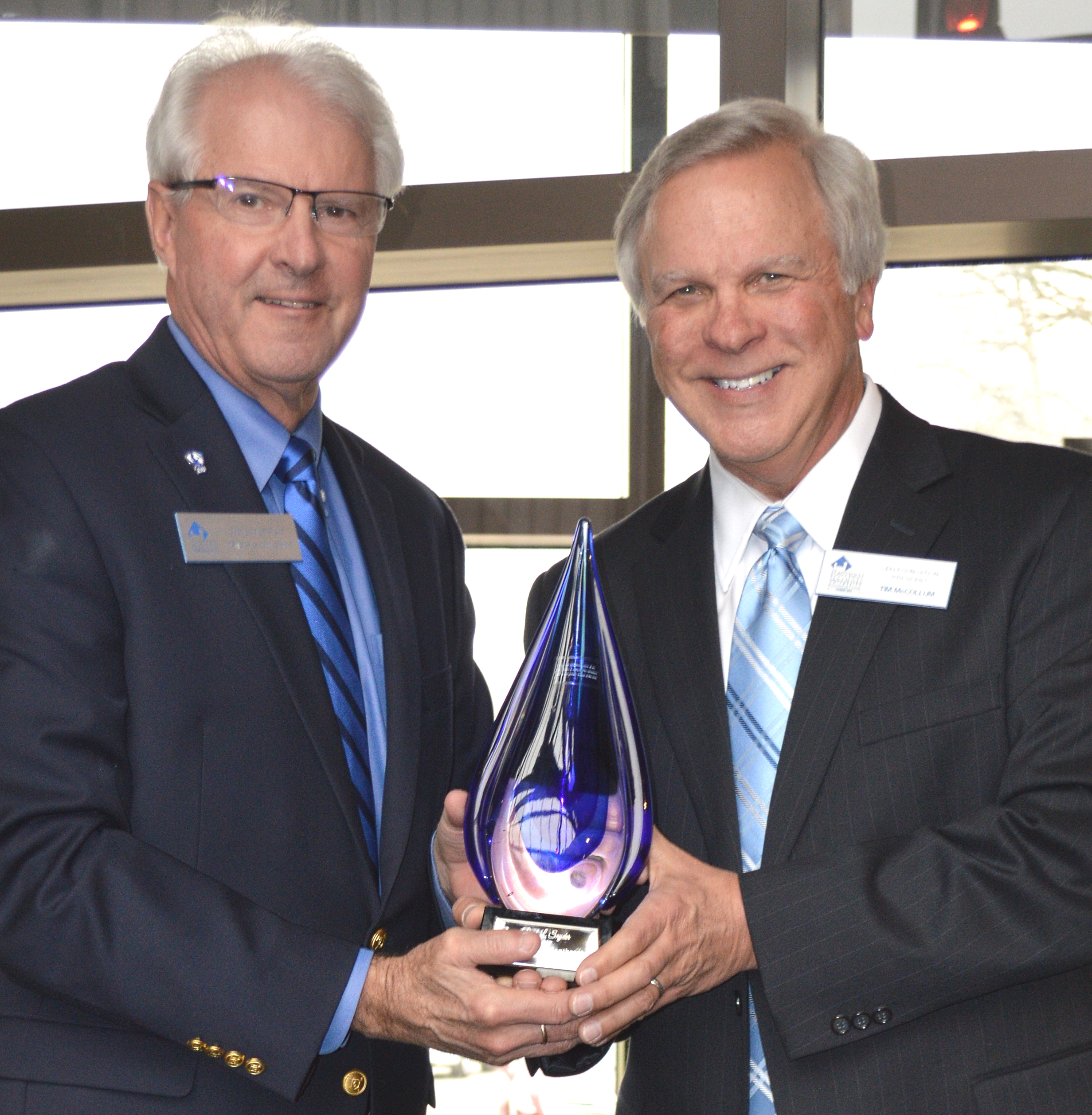 Dr. Harry Frost, a 1960 graduate of EIU, went on to a 56-year career as a chemist for the Illinois Cereal Mills/Cargill Corporation and has served on several professional organizations and local boards. For his broad involvement, he also was awarded the EIU Distinguished Alumni Award in 2013. Gladys Frost demonstrated an equal passion for community service, working for a law firm in Paris, Illinois for more than 30 years while contributing to numerous community not-for-profit organizations. In 1986, the Frosts began donating annually to the EIU Foundation, increasing their contributions each year. Their first major gift came in 2012, when they gave to the Sidney R. Steele Student Summer Award, which is traditionally presented to a graduate student showing exceptional promise in the field of chemistry.  In 2015, they also created an endowed award—the “Harry Frost Chemistry Fund” scholarship—with the goal to financially assist a full-time junior, senior, or graduate student pursuing a chemistry career. According to McKenzie, their ongoing contributions “demonstrate the Frost’s deep passion and unwavering commitment for helping EIU students succeed in their academic and personal endeavors.”

Paul Snyder graduated from EIU’s Lumpkin School of Business in 1970. He started his career as an intern with KPMG International in 1969 before going on to serve in a number of governance and operational leadership roles with the company, including its United States and America Board of Directors and as its Chicago, Minneapolis and Midwest Area Office Managing Partner. Following his retirement, he served on the board of directors and as chair of the Christopher & Banks Corporation. Snyder currently sits on the Board of Directors for Securian Financial Group and remains active in his communities, having served in board leadership positions at the Chicago History Museum, Chicago and Minneapolis YMCAs, and the Stone Canyon Community Foundation. Snyder’s strong relationship with EIU has earned him recognition as a Distinguished Alum of the EIU Lumpkin School of Business and former Executive-in-Residence status at the university. Snyder was a vital member of the 2012 EI&U Expect Greatness campaign, as well as the university’s “Taking Care of Business” campaign, for which the west foyer of Lumpkin Hall was named in his honor. In 2013, he was awarded the Foundation’s Outstanding Foundation Member Award. He and his wife Kathy also have endowed the “Paul and Katherine Snyder Scholarship Fund” and the “Paul and Katherine Snyder Faculty Development Fund.” McKenzie noted that “Paul Snyder’s ongoing involvement in EIU’s student success initiatives has benefited numerous students in their pursuit of an education, and he is truly deserving of being named one of EIU’s 2017 Outstanding Philanthropists.”

The mission of the EIU Foundation is to encourage and provide private support to Eastern Illinois University, to promote the ideals of volunteerism and philanthropy among alumni, friends, and employees of the university, and to assist and support Eastern Illinois University’s educational and cultural mission by providing a supporting academic and artistic environment through scholarships and grants.