Erin Reichert, a social studies teacher at Bluffton High School in South Carolina and an Eastern Illinois University alumna, was selected as one of only 44 national honorees for the 2017-18 Milken Educator Award, which provides public recognition and individual financial rewards to elementary and secondary school teachers, principals and specialists from around the country who are furthering excellence in education. The prestigious award, which Teacher magazine hails as the “Oscar of Teaching,” came with an unrestricted cash prize of $25,000. 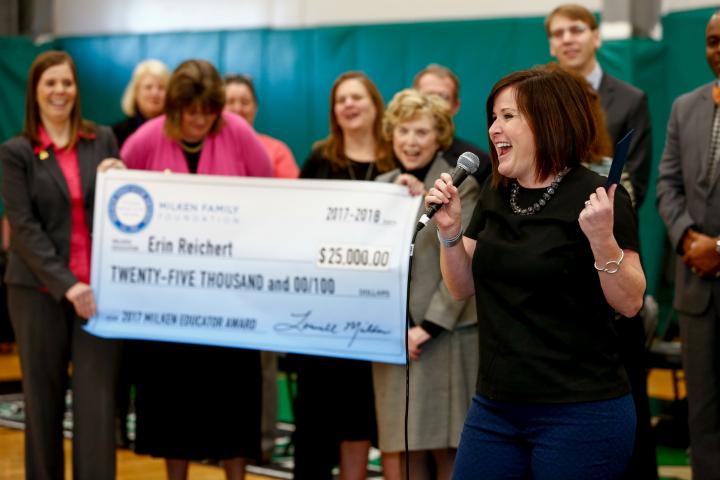 “Civically engaged students are the foundation of what will become a civically engaged populace,” said Milken Educator Awards Senior Vice President Dr. Jane Foley, herself an Indiana Milken Educator from the 1994 class. “Erin Reichert helps build that foundation by encouraging her students to engage in issues facing their community and making a difference. The keen awareness about the world around them puts Erin’s students on solid footing for the future. I congratulate Erin and look forward to her contributions to the national Milken Educator Network.”

Reichert earned her bachelor’s degree in social science from Eastern Illinois University in 2000 before earning a master’s in counseling and guidance from Lewis University in 2005.  She currently teaches in Bluffton, SC, and was the only teacher in that state to receive the award for the current 2017-18 academic year.

Reichert’s course curriculum prepares students to be informed and engaged citizens through an immersive style of teaching. She takes her classes to local polling centers, food drives and the state capital, and also asks her senior students to prepare a community-wide service project.

Outside the classroom, Reichert also mentors new teachers, works with her school district’s peer observation teams, serves as the school’s liaison to district administration, and leads professional development sessions for the school and district. She also is an APUSH exam reader. She also has served as a local coordinator for exchange students as well as on several public service announcements for United Way.

“There’s a lot of misconceptions about teaching,” Reichert said when asked what message she’d share with young people entertaining the idea of teaching as a career. “Teaching can be lucrative. I think it can also be very, very rewarding.”

In addition to ongoing participation in the Milken Educator Network, recent award recipients were invited to attend a Milken Educator Forum in Washington, D.C., where many of the winners shared the opportunity to network with colleagues and hear from state and federal officials about maximizing their leadership roles to advance educator effectiveness.