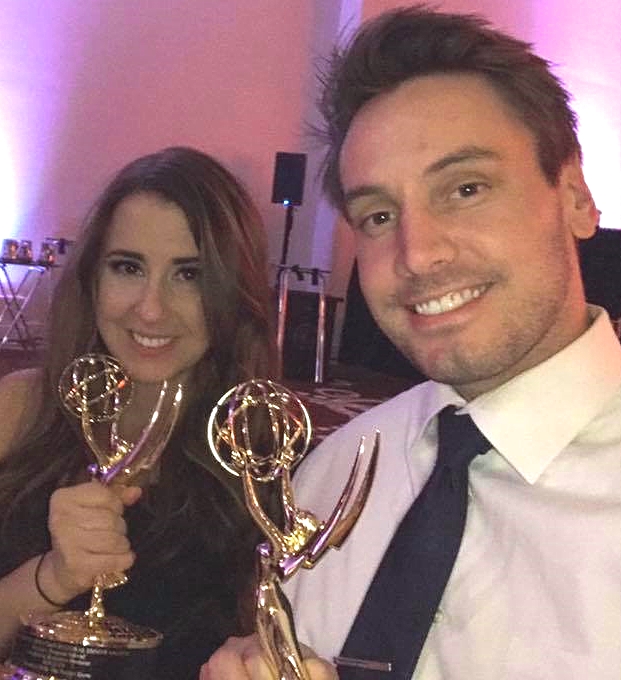 Eastern Illinois University alumnus Kevin Jeanes, along with his co-worker and fiancée, Lisa Burris, both earned Emmy Awards for their shared feature covering the 2016 monsoon in Tucson, Arizona.

“We couldn’t be more excited about the award. It’s going to be something special we share for the rest of our lives,” said Jeanes of their dual recognition.

Burris served as executive producer while Jeanes acted as host of the 30-minute feature, called “Monsoon 2016: The Perfect Storm.”

Regarding his EIU experience, Jeanes added “I can’t say enough about my years at EIU. I owe all of my success to the hands-on approach of WEIU and the Geography/Geology department. Kelly Runyon, Cameron Craig and so many others at EIU are excellent mentors that I still keep in touch with.”

Jeanes, a 2010 EIU graduate, worked as a forecaster in EIU’s WeatherCenter and for WEIU-TV SkyWatch. After graduating, he worked for NBC affiliate WWBT in Richmond, Virginia as a weekend meteorologist before earning a chief meteorologist position in Tucson with CBS affiliate KOLD-13, where he earned his Emmy in October. Since, he has taken a position with ABC affiliate WXYZ-7 in Detroit.

Jeanes and Burris are planning a March 2018 wedding.