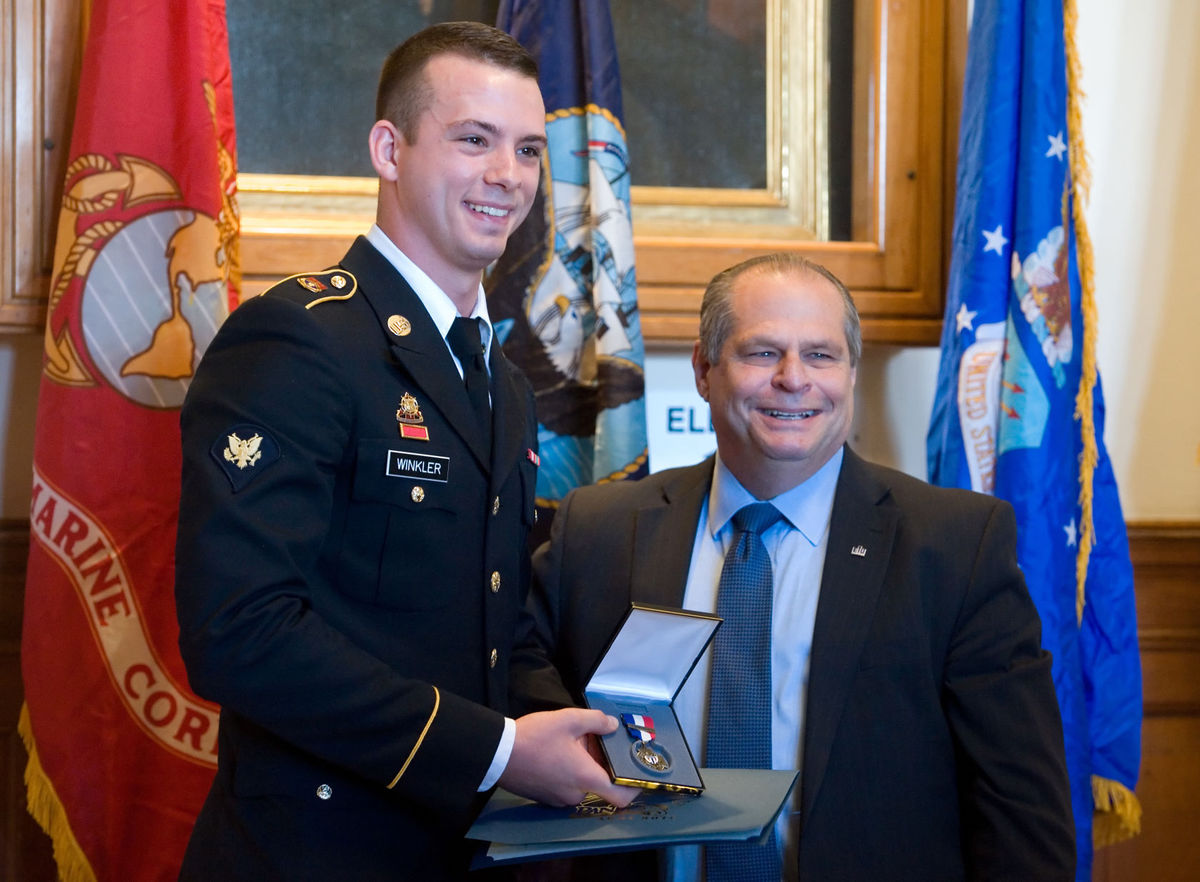 Eastern Illinois University ROTC Cadet Joseph Winkler of Paris received The Legion of Valor Bronze Cross for Achievement, one of the highest honors a cadet can achieve, during the Veterans Day ceremony Friday morning on campus.

Eastern President David Glassman presented the award, which was a surprise to Winkler, to this cadet during the annual ceremony in the Old Main atrium. Winkler, who was already helping lead the ceremony, received a standing ovation.

"Thank you for the wonderful support. I had no clue," said Winkler, who was visibly moved by the surprise award.

Glassman read Winkler's biography as part of the award presentation. Winkler graduated from Paris High School in 2012 and then joined the Illinois National Guard. He continues to serve in the 1544th Transportation Company in Paris.

The cadet joined Eastern's ROTC program in fall 2014. He conducted a Cultural Understanding and Language Proficiency mission in the Philippines in summer 2016. He graduated from Air Assault School at Fort Benning, Ga.; completed Advanced Camp at Fort Knox, Ky., in the top 15 percent of his group; and attended cadet troop leader training at Fort Bragg, N.C., in summer 2017.

He is a senior majoring in sociology at EIU and plans to pursue his master’s in clinical psychology and counseling there.

"In all sincerity, congratulations on this momentous accomplishment. You make us very, very proud," Glassman said.

Eastern reported that the criteria for the award of the Bronze Cross for Achievement has been developed by The Legion of Valor in conjunction with officials of the Army, Navy, and Air Force. Administration of the program is conducted by the services with the support of The Legion of Valor. EIU reported that due to rigid standards and screening, only 80 Bronze Crosses are being awarded in the nation this year.

Friday's ceremony also include a performance of the national anthem by the Unity Gospel Choir, prayers by the Rev. Matthew Thomas, remarks by EIU student veteran Adam Griffy, three volleys by EIU ROTC cadets, and a performance of taps by Benjamin West. Glassman, Griffy and Shannon Bell placed a wreath at the veterans memorials in front of Old Main.

Griffy, who served as a Navy Corpsman in Iraq, said during the ceremony that when he is asked what Veterans Day means to him, he thinks of "sacrifice" and "support." Griffy said he thinks every day about the sacrifices made by his brothers at arms and other service members, and of the sacrifices made by their families. He said knowing that the community stands with service members makes a significant impact on them.