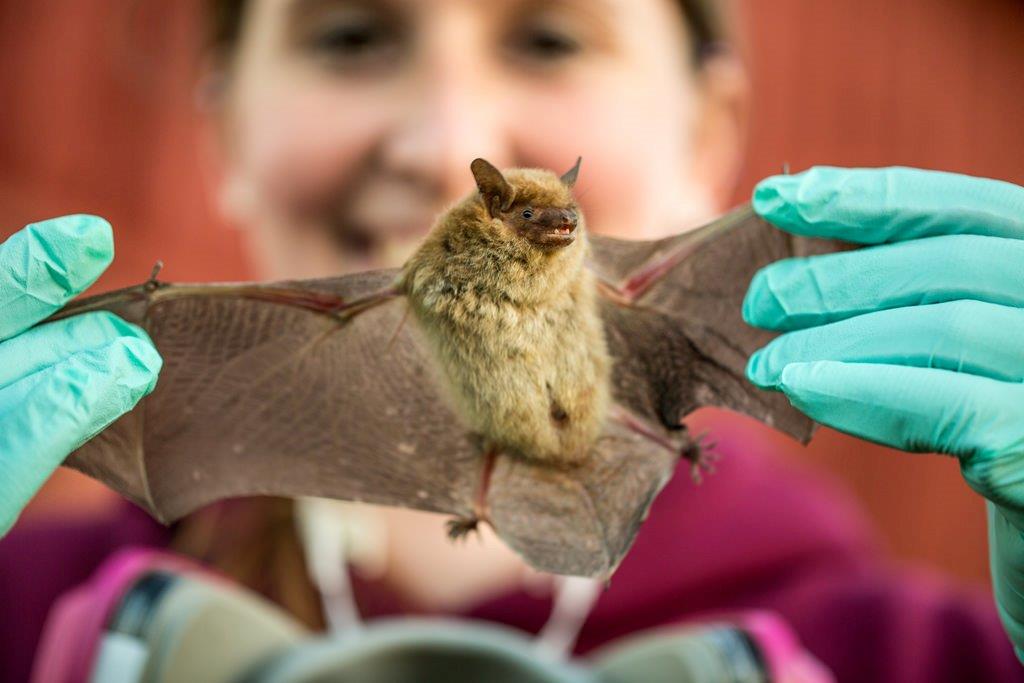 Those who enjoy an occasional shot of tequila may have a bat to thank.

“Many bat species are pollinators, mostly in tropical areas and a few in our southwestern states,” said Jill Deppe, associate professor of biological sciences at Eastern Illinois University.  “They’re essential to fruit production and a couple are known to pollinate the tequila (or blue agave) plant.”

But bats have other important roles to fill right here in Illinois.  There are about a dozen bat species that call the state home.

“All bats in Illinois are important insect eaters,” Deppe continued.  “Some of their tastes lean toward beetles, others to moths.  Some are more generalists.

“There are reports that bats save billions of dollars annually in the United States by eating insects, including crop pests.  If bats go away or disappear, food costs will increase.”

Unfortunately, habitat loss, wind energy development and disease over the past few decades have already caused declines in the numbers of many North American bat species.  Fortunately for Illinois, bats here, including the more common little brown bat, appear to be holding on -- at least for now, Deppe said.

Wildlife conservationists believe that by providing high quality habitat in protected areas throughout the state, they will contribute to the conservation of these populations.  However, inventories of bats, including baseline data necessary for documenting population trends, as well as information on bat habitat requirements, are scarce for state parks and nature preserves.  Thus, the Illinois Department of Natural Resources has made acquisition of basic data on bats in these protected areas a priority.

That’s where Deppe and her students come in.

Thanks in part to IDNR monetary support in the amount of nearly $2,000, EIU teams are able to inventory and research three state parks and nature preserves in Coles and Clark counties to collect baseline data on bat species composition and diversity, as well as quantify bat habitat associations.  Inventory data is then shared with the IDNR to assist with management priorities.

“We’ve been able to get some really good information for them,” said Deppe, whose other research focuses on the study of bird migration.

“While I have focused on migratory songbirds for most of my career, I recently expanded the scope of my research to include mammals, particularly bats and small rodents,” she continued.  “My research is motivated by an interest in understanding wildlife/habitat associations so that we can better conserve and manage wildlife in ecosystems that are increasingly modified by humans.”

Students studying biological sciences at Eastern show a lot of interest in wildlife, and many of them are specifically interested in participating in Deppe’s bat research. Doing so requires some late night treks into the wild.

“We usually arrive at a site around 6:30 in the evening, which gives us time to set up,” Deppe said.  That process typically includes the installation of two nets running parallel to each other, with acoustic recorders placed nearby to record echolocation calls.  The nets are stretched across streams or creeks for maximum effectiveness.

“Once we’re set up, we move away from the nets (at least 50 meters) and then we sit and wait,” Deppe continued.  “We’ll plan on being at the site for four hours, minimum.”

The researchers, who work in teams of at least two for safety reasons, return to the nets every 10 minutes or so.  If they find a bat tangled in one of the nets, they’ll carefully remove and examine it to determine species, age and sex.  If it’s a female, they’ll record if it is pregnant and/or lactating.  Documenting reproduction in an area is a good sign.

All bats are released once they’ve been examined and the data recorded. 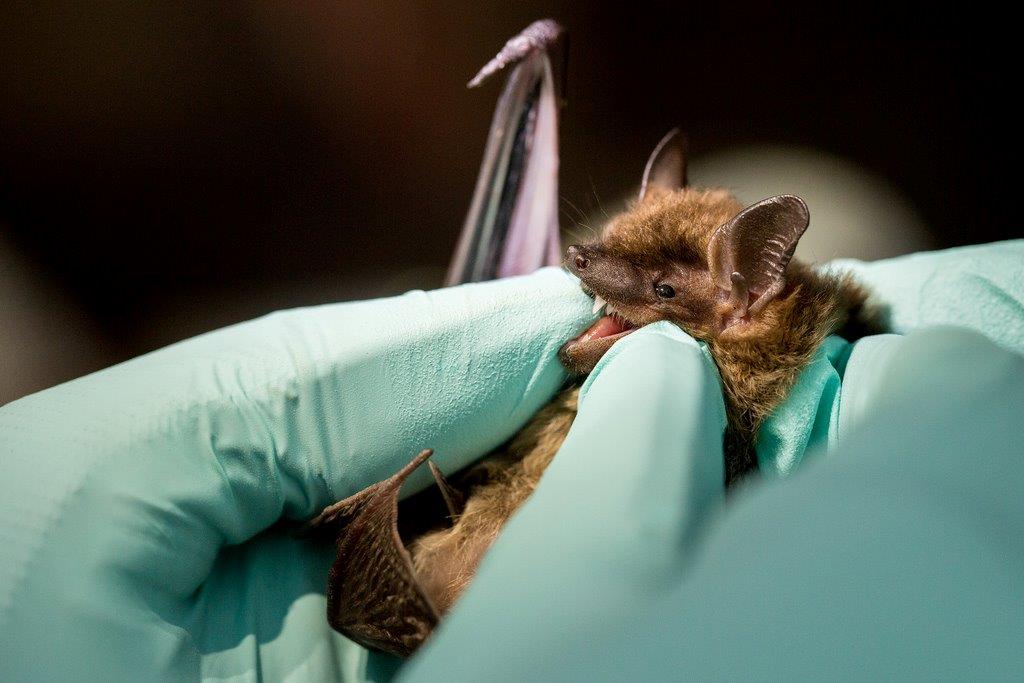 Safety precautions are followed at all times.  For the protection of both the researchers and the bats, two sets of gloves are worn while the bats are being handled.  Outer latex gloves, which are discarded after each bat encounter, help prevent the transmission of any possible disease among the bats.  Leather gloves worn underneath the latex gloves provide the researchers protection from possible bites.

"The male bats get rather frisky in the fall, which is when they mate with the females,” Deppe said, explaining that fertilization is delayed until after winter hibernation.  Babies are born late May to early June.

“And then our pregnant females are big and feisty,” she added.

If researchers net 10 to 11 bats, it’s considered a good night.  One to two captures is a typical night, and “no bat nights” are not rare, Deppe continued.

Careful net location maximizes the researchers’ success.  The nets, each approximately six yards high and nine yards wide, are stretched over waterways, blocking the bats’ flyway.  Even so, their highly developed sense of hearing, more often than not, warns the bats of the nets’ presence.

Bats emit sounds that, by bouncing off of objects in the bats’ path, send echoes back.  These echoes help bats determine the size of an object and its location all in a split second, allowing the mammals ample opportunity to avoid any obstruction.

Distracted bats are the most likely to be caught in researchers’ nets.  “Maybe they just ate an insect,” Deppe said.  “Or they have mouths full of water.  Or, maybe, they’re just caught off guard by something else as they get close to the nets.”

As they study the bats themselves, Deppe and her undergraduate and graduate researchers also take note of the environment in which they catch the bats.  For example, careful note is made of the type, size and condition of the trees that are growing in the bat-friendly territory.

According to Deppe, researchers compile a complete report of their findings each January and present it to the IDNR.

Research in Deppe’s lab aims to understand the factors explaining why species occur where and when they do, the patterns of animal movement in search of suitable conditions, and the consequences of movement and habitat selection on wildlife fitness and species distributions.

IDNR support is made possible through a grant from the Illinois Wildlife Preservation Fund Grant Program, designed to preserve, protect, perpetuate and enhance non-game wildlife and native plant resources of Illinois through preservation of a satisfactory and ecologically balanced environment. Funds for this grant program are from the tax check-off offered on Illinois income tax returns.

Undergraduate Research Grants through the Department of Biological Sciences and other internal grants from Eastern Illinois University’s College of Sciences and the Council on Faculty Research, also helped supplement funding for the project.