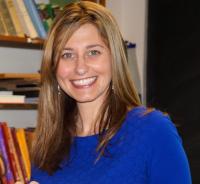 Dr. Vanesa Landrus was born in Río Cuarto, Argentina, where she began her studies in English Literature. She joined Eastern Illinois University as a graduate student to obtain her second degree in World Languages with a concentration in Spanish. She received her M.A and Ph.D. in Spanish Literature and Cultural Studies from the University of Illinois in Urbana-Champaign (2007).

Her scholarly work focuses on Nineteenth Century women essayist and their perception of politics, race, gender, body image, and social class. Her secondary research area is Latinx Studies. She has presented at many national and international conferences. Her research has been published in Revista Iberomaericana, in the book Retomando la palabra: Las pioneras del XIX en diálogo con la crítica contemporánea by Editorial Iberoamericana, and in ELADD, virtual collection of biographies and critical essays on Latin American Nineteenth Century Women Writers.