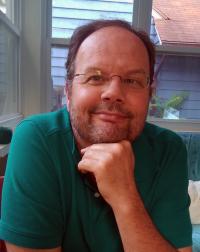 Tim Engles, Professor of English and Director of Undergraduate Studies


Fall 2020 Office Hours (all virtual): via e-mail or by appointment via D2L

Tim Engles teaches courses in multicultural and contemporary American literature, as well as a variety of writing courses.  He is the author of White Male Nostalgia in Contemporary North American Literature and co-editor of Approaches to Teaching DeLillo's White Noise and Critical Approaches to Don DeLillo. His current research examines representations of white masculinity in literature and film. His previous studies have included social media performances of white identity, depictions of judicial racism in young adult literature, and teaching literature in relation to critical whiteness studies. His scholarship (see links below) has also appeared in numerous journals, edited books and reference sources, and he serves on the editorial board of the journal MELUS: Multi-Ethnic Literature of the United States.

"'I'm Sure You Must Be Somebody': White Masculinity in Don DeLillo's Americana and White Noise." Don DeLillo: Contemporary Critical Perspectives. Edited by Katherine Da Cunha Lewin and Kiron Ward. Bloomsbury (2019)

"About Schmidt's Whiteness: The Emotional Landscapes of WASP Masculinity." The Construction of Whiteness: An Interdisciplinary Analysis of Race Formation and the Meaning of a White Identity. Edited by Stephen Middleton, David R. Roediger and Donald M. Shaffer. University Press of Mississippi (2016)

"'Proof of the loop': Patterns of Habitual Denial in Tim O'Brien's In the Lake of the Woods and Don DeLillo's Libra." Critical Insights: Tim O'Brien. Edited by Robert C. Evans. Salem Press (2015)

"Incarceration, Identity Formation, and Race in Young Adult Literature: The Case of Monster versus Hole in My Life." (Co-author with Fern Kory) English Journal 102.4 (March 2013)

The New Immigrant Whiteness: Race, Neoliberalism, and Post-Soviet Migration to the United States, by Claudia Sadowski-Smith.  Journal of American Studies 53 (2019)

Reichsrock: The International Web of White-Power and Neo-Nazi Hate Music by Kirsten Dyck and Trendy Fascism: White Power Music and the Future of Democracy by Nancy S. Love. American Music 35.4 (2017)