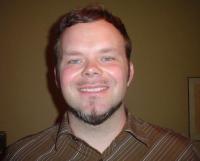 Jad Smith is a Professor of British Literature and Cultural Studies and a member of the Women's, Gender, and Sexuality Studies faculty. Jad teaches graduate seminars titled Enlightenment Sexualities, Literature and Visual Culture in the Long Eighteenth Century, Restoration and Eighteenth-Century Drama in Performance, and Science Fiction Vanguards: New Wave and Cyberpunk, as well as a range of undergraduate courses.

Included on Locus Magazine's 2016 Recommended Reading List in the nonfiction category. Available through University of Illinois Press, and through Amazon, Target, and other online retailers.

"Smith has made another lively contribution to understanding science fiction and its development, proving that academic and scholarly overview can also be of interest to the 'fan.'"

"Readable, knowledgeable, insightful, and altogether a success."
- James Gunn, Center for the Study of Science Fiction

"Jad Smith appears to know everything about Alfred Bester's career, and there's no career in SF more worth knowing about. On the strength of two indispensable novels, three unreadable ones, and a couple of dozen short stories--some of them barely passable, but others astonishing--Bester electrified SF, fathering the New Wave and grandfathering cyberpunk. Jad Smith explains exactly how he did it."
- Brian McHale, author of Postmodernist Fiction

"Smith depicts the author as a man of wide scope whose literary influences . . . endowed his best writing with a sophistication lacking in many pulp writers. By the time of his death in 1987, he was acknowledged by the rising generation of cyberpunk writers for, as Smith says, 'marrying the gaudy, pop-culture feel of pulp fiction with high style.'"
- David Luhrssen, Shepherd Express

"Smith's examination of Bester's stellar trajectory from pulp fiction writer to Science Fiction Grand Master is augmented with looks into Bester's personal life, how he looked at mainstream science fiction, and his determination to forge his own path in a field that didn't see him coming."
- Kirkus Reviews

"The new 'Modern Masters of Science Fiction' series from University of Illinois Press promises a category of monograph that up to now has not been common in sf criticism: book-length retrospectives devoted to the careers of major authors in the genre. The first of these to arrive is Jad Smith's fascinating new book on John Brunner, and if Smith's approach in John Brunner represents the quality of the series as a whole, 'Modern Masters of Science Fiction' will undoubtedly prove an important resource for scholars of sf and fantasy in the coming decades. Smith's exhaustively researched book puts Brunner's many novels into conversation with his public lectures, interviews, private letters, and political activism, as well as with longstanding fan debates about the essence of sf. The result casts a new--and, at times, quite tragic--light on the complicated legacy of this important figure in the history of the genre."
- Gerry Canavan, Journal of the Fantastic in the Arts

"John Brunner proves to be an excellent model for what later volumes in the series might look like – clearly and accessibly written, free of theoretical or historical hobbyhorses, and meticulously researched. . . . Smith paints a fascinating portrait of the rapidly changing world of Anglo-American SF of the 1950s through the 1980s, and of the significant role that Brunner played as a kind of bridge between SF traditions."
- Gary K. Wolfe, Locus Magazine

"Smith’s analyses caused me to hunt out stories I have (in the yellowing and fragile pages of the Nova magazines) in order to read them at last: fine and often ground-breaking work that really does seem to have been all but forgotten for decades....It is to be hoped that this book succeeds in its aim of establishing John Brunner in his rightful place as one of the truly important modern writers of fantastic fiction."
- John Howard, Wormwood 20

"The real strength of Smith’s book is in situating Brunner’s work within the context of its time. This is a fascinating story, and well worth the study."
- Paul Kincaid, Extrapolation

"Smith writes in an engaging style, unstintingly chronicling the vicissitudes of the man’s life as well as rightfully hailing his triumphs. . . . As a general conclusion, if this is the calibre of entries in this series, then there is much to look forward to."
- Simon Marshall-Jones, The Spectral Press

"Though coming from a university press -- it forms part of the Modern Masters of Science Fiction series from the University of Illinois Press -- this book isn't steeped in literary criticism or swamped in jargon; general readers interested in the subject will find it perfectly accessible. . . . This book left me keen to read more Brunner, and also to read further titles in the Modern Masters range."
- Stephen Theaker, interzone

"The comparative neglect of the late John Brunner probably derives from the fact that he does not fit comfortably into any of the standard models of discourse within science-fiction criticism; one of the strengths of Jad Smith’s work is that it addresses this. . . . He also pays appropriate amounts of attention to Brunner’s exploration of other genres – fantasy, horror, and crime – and his non-genre work."
- Roz Kaveney, Times Literary Supplement

"Based on extensive research and filled with thoughtful commentary and insights, Jad Smith's book will stand alone as the one essential resource on John Brunner, an important science fiction writer who merits much more attention than he has so far received."
- Gary Westfahl, author of Hugo Gernsback and the
Century of Science Fiction

"Smith gives an insightful, succinct account of a tireless writer disparaged from both ends during his peak years—the ‘60s and ‘70s—as too literary and too pulpy. Smith’s biography shows how Brunner balanced craft and conscience in stories at once page turning and complex."
- David Luhrssen, Express Milwaukee

"The University of Illinois is publishing a series of monographs called Modern Masters of Science Fiction. They've started with an excellent, and all too forgotten, one: John Brunner. Jad Smith has given him a thorough and perceptive treatment. Highly recommended."
- Arthur D. Hlavaty, editor of Nice Distinctions

"If you have any interest in science fiction and have read John Brunner, then I see this as an essential read."
- Stephen C. Ormsby, author of Long Lost Song

"I recommend this book to anyone who is an admirer of John Brunner or is a fan of science fiction history."
- The Website at the End of the Universe

"Charity Education and the Spectacle of 'Christian Entertainment,'" inThe Culture of the Gift in Eighteenth-Century England, eds. Linda Zionkowski and Cynthia Klekar (2009)

"How Fanny Comes to Know: Sensation, Sexuality, and the Epistemology of the Closet in Cleland’s Memoirs," The Eighteenth Century: Theory and Interpretation 44.2-3 (2003)

"Völkisch Organicism and the Use of Primitivism in Lawrence’s The Plumed Serpent," D. H. Lawrence Review 30.3 (2002)