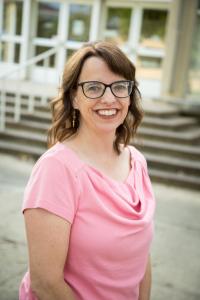 
Dr. Routt, a first-generation college student, teaches all levels of Spanish language, literature, and culture, as well as a senior seminar on cultural diversity and ethnic identity in U.S. literature.  Despite her completion of the pre-med sequence and her acceptance letter to medical school, she saw the light and followed her heart, deciding to study Spanish after an undergraduate study-abroad experience in Mexico.  After earning her Ph.D. at Indiana University specializing in colonial Latin American literature, she lived and worked in Central America for a year before making her home at EIU in Charleston.

While Dr. Routt thinks classrooms are fine, she values most the high-impact experiences that take place outside their walls.  Honors students in her intermediate Spanish classes participate in service learning with Spanish-speakers in the Charleston community, and combine language and culture study with museum visits.  Each spring break, she co-leads a study abroad trip to the beautiful colonial city of Antigua Guatemala where students of all majors and language levels across campus can earn 2 credit hours.  Dr. Routt is also one of the proud faculty sponsors of Alpha Psi Lambda (the largest co-ed, Latino-interest fraternity) and the Spanish Club, and frequently collaborates with Sigma Delta Pi Spanish Honor Society and the Latin American Student Organization.

Dr. Routt lives in a bilingual household with her husband from El Salvador, one daughter at Charleston High School and the other away at college.

*Office hours: MTRF 2-3:00 pm, by appointment, and on a walk-in basis.  I am usually in my office 9:00-3:30 daily.  Feel free to consult my teaching schedule on the door and stop by any time I am not in the classroom.  If I can't help you when you come by, we will make an appointment.*

Gave three workshops with two colleagues (one from Eastern, another from Millikin University) at the Fall Conference of the Illinois Council on the Teaching of Foreign Languages.  Tinley Park, IL, October 21-22, 2011.

“Skeleton Puppets and the  Day of the Dead.”  Presented with Carlos Amaya.  Conference of the Illinois Council on the Teaching of Foreign Languages.  Chicago, IL, October 22-24, 2009.

“Paper Flowers and the Day of the Cross.”  Presented with Carlos Amaya.  Conference of the Illinois Council on the Teaching of Foreign Languages.  Chicago, IL, October 22-24, 2009.