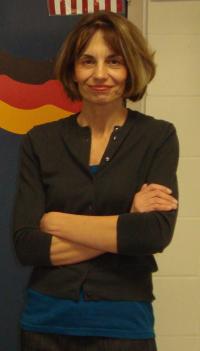 You can also schedule a Zoom meeting with me by following this link:

Prof. Eydt-Beebe teaches all levels of German, special topics courses on German literature and culture, the Methods course for teacher licensure candidates, and EIU's senior seminar, Word Film: Language and Culture in Film. As a strong advocate for world language learning at all levels, she directs an after school program, where EIU advanced language students teach Spanish, French and German in area elementary schools. In addition to helping students study abroad at German universities in Würzburg and Lüneburg, Dr. Eydt-Beebe offers a faculty-led study abroad program (co-directed with Dr. Sace Elder from History) to Berlin and Munich for all majors.

After growing up in a small village in the Fulda valley in the state of Hessen, she attended Philipps-Universität Marburg and Georg-August-Universität Göttingen where she received her Staatsexamen degree in English. Coming to Penn State University as a visiting scholar, she developed a passion for teaching German and decided to stay, earning an MA and a PhD in German from Penn State.  She joined EIU in 2005.

Her research interests include methods of foreign language teaching and strategies of developing oral proficiency. She has also presented and published in the areas of foreign language film studies and translation studies. She has most recently served as president of the Southern Illinois Chapter of AATG (American Association of Teachers of German) and as chair of the higher education committee of ICTFL (Illinois Council on the Teaching of Foreign Languages). She completed ACTFL/CAEP reviewer training and serves as program reviewer of Foreign Language teacher education programs seeking CAEP recognition.

You will see her every Friday evening at “The JAC,” with students and people from the local community having fun speaking German at Stammtisch. Her favorite quote is by Johann Wolfgang von Goethe: “Those who know nothing of foreign languages know nothing of their own language.”