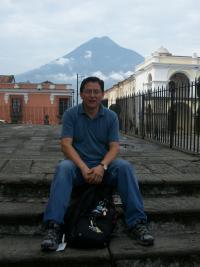 
Dr. Amaya came to Eastern in the year 2000 after earning his Ph.D. at Indiana University in Bloomington, where he specialized in Contemporary Latin American Theater.  He enjoys teaching all levels of language, culture and literature.  He is the faculty sponsor of EIU's very active chapter of the National Collegiate Spanish Honor Society, Sigma Delta Pi, and the national office regularly awards EIU student members their competitive study-abroad scholarships in recognition of their academic and cultural activities.

Each spring break, Dr. Amaya co-leads a study-abroad program to the beautiful, historic city of Antigua, Guatemala.  Helping them have one of the most transformational experiences of their college career is among the most satisfying and enjoyable aspects of his work as a professor.

Dr. Amaya completed 2 years of undergraduate study at the Universidad Centroamericana in his home country of El Salvador, before being awarded a Fullbright Scholarship to finish college in the United States.  He earned his B.A. in Art History and M.A. in Hispanic Literature at the University of Louisville, and remains an avid Cards basketball fan.  When not in the classroom, you can frequently see Dr. Amaya running on campus or working in his garden at his home close to his office, where he lives with his wife and 2 daughters.