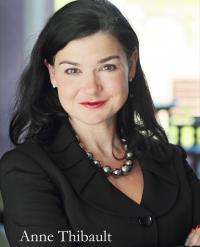 
Anne Thibault comes to EIU from the theatre faculty at Columbus State University in Georgia, where she also ran a citywide arts program for at-risk and incarcerated youth, Empowered Youth of Columbus.  Previously, she was the Associate Artistic Director at Fairbanks Shakespeare Theatre.

Anne has worked professionally as an actress, playwright, and director for over twenty years.  At EIU, she has directed A Bright New Boise, The Seagull, Next to Normal, Dogfight, Romeo + Juliet and more. She most recently directed productions of A Doll’s House Part II in New York and North Carolina.

She toured with the National Shakespeare Company for three years as Lady M and Lady Capulet, among others.  Other regional credits include acting work at the North Carolina Stage Company (Matt Damon/Matt & Ben, Jane/THIS,Maureen/The Beauty Queen of Leenane, Catherine/Proof, Fay/Loot, and the one woman show The Syringa Tree), as well as several seasons at the Fairbanks Shakespeare Theatre (Kate/Taming of the Shrew, Marguerite/Camino Real, Mistress Overdone/Measure for Measure).  Other regional work includes the White River Theatre Festival, the Theatre at Monmouth, the Clarence Brown Theatre, the Fulton Opera House, the Boston Peabody and more.  Internationally she has performed at the Salzburg Seminar, Castello de Sannicandro di Bari, AKT-ZENT in Berlin and at the GITIS School in Moscow. In New York, she has appeared off-Broadway in The Seagull, the New York International Fringe Festival, and in several plays by Noah Haidle at HERE.  Work in television and film include the independent film Waterville, Comedy Central's Strangers with Candy, and Signe Bauman's Birth.

Her plays I Wrote This Play to Make You Love Me, Antigone (or I really wish you hadn’t done that), and A Wrinkle in Time have been produced professionally across the country.

Her practice in applied theatre for corporate communication brings her research work to an international audience through workshops with the US Army, the Air Force, Deloitte, PwC, and more. BFA, Emerson College; MFA, University of Tennessee.  Her greatest productions are her daughters with husband Darren: Charlotte, Vivian, and Edith Geen.