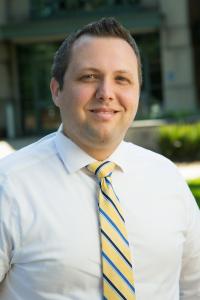 Instructor Joe Astrouski is a reporter with a decade of experience in public and commercial television. Joe has worked as an investigative reporter at WAND-TV (NBC) in Decatur, Illinois, as a feature and public affairs reporter/producer for Wisconsin Public Television in Madison, and as a reporter and weather forecaster for WTHI-TV (CBS) in Terre Haute, Indiana. His work has earned regional Emmy awards for environmental reporting and human interest reporting, a regional Emmy nomination for news writing, and a Wilbur Award for religion journalism.

Joe holds a Master's Degree in Political Science from the University of Illinois at Springfield and a Bachelor's Degree in Journalism from Eastern Illinois University. He is a proud native of Belleville, Illinois and a 2007 inductee into the White Castle Hall of Fame. Joe's wife Charity is a band director in the Shelbyville School district, where she was honored as PTA Teacher of the Year in the 2018-2019 school year. Joe enjoys fishing, cooking, long-distance hiking, making music, and traveling.

School of Communication and Journalism

School of Communication and Journalism