Lincoln: The Constitution and the Civil War 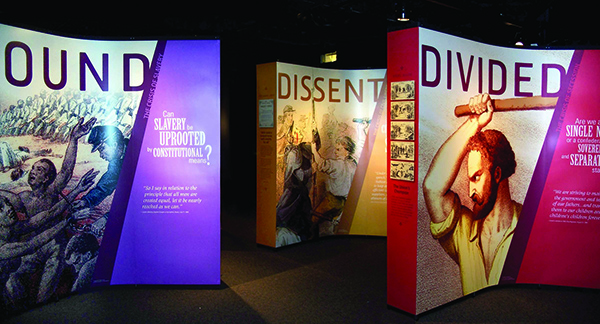 Lincoln: The Constitution and the Civil War
Traveling Exhibit

Even as the convention that framed the U.S. Constitution ended in September 1787, Americans began debating critical issues that their founding charter left unresolved. Were the states truly "united"? How could a country founded on the belief that "all men are created equal" tolerate slavery? Would civil liberties be safe in a national emergency? Like ticking time-bombs, these issues threatened to explode. Finally, with the election of Abraham Lincoln as the nation’s first anti-slavery president, they did. As the country plunged toward civil war, Americans wondered whether their new president-elect — a one-term congressman and trial lawyer from Illinois — could resolve the crisis. Would Abraham Lincoln survive the test? Would the nation?

Walking through the Exhibition

On the eve of his inauguration in March 1861, Americans really knew little about him. This one-term congressman from Illinois had held no important military command, no leading position in business or industry. He had done well as a lawyer. He was a canny politician. But he had been influential only in his home state. Who was Abraham Lincoln? In Meet Mr. Lincoln, visitors can learn about Lincoln’s life before he became president. Anchoring this section of the exhibition is an image of Abraham Lincoln as he appeared in a lithograph published in Leslie’s Illustrated Newspaper in March 1861. This central image is surrounded by smaller vignettes showing scenes from the early life of the president-elect. Accompanying text provides the back-story to Lincoln’s election as president.This section continues with a photographic timeline of Lincoln throughout the crucial years of 1858 to 1865. Images range from a young beard-less Lincoln as he appeared in 1858 just prior to the Lincoln-Douglas debates and ending with a striking 1865 image of the war-ravaged president. In this short span, Lincoln’s visage changes dramatically.

In Oath of Office, visitors meet Lincoln at his inauguration on March 4, 1861, at a time when the Constitution was being challenged and the "United States" was falling apart. As thousands of his countrymen watched, Lincoln promised that the government would not attack the South if the Union was not attacked, but he was about to take a solemn oath "registered in heaven" to "preserve, protect, and defend" the Constitution and the Union it served. While crowds cheered the new president, what Southerners heard that day were not words of moderation, but a declaration of war.

The anchor image in this section is a striking contemporary photograph of the incomplete Capitol Dome, evoking Lincoln’s struggle to complete the work of the Founders. Lincoln’s signature stovepipe hat also features prominently in this section and serves to further humanize this sometimes larger-than-life character. Visitors learn that not only did Lincoln wear it to accentuate his already great height, but he found it a practical place to store his notes. In addition, a reproduction of a draft copy of Lincoln’s first inaugural speech with handwritten notes shows the great struggle to hit the correct tone. His next-to-last draft closed with a challenge to secessionists: "With you, and not with me, is the solemn question of ‘shall it be peace, or a sword?’"

Divided asks the question, "Are we a single nation, or a confederacy of sovereign and separate states?" Lincoln’s steadfast belief that secession by the Southern states was not only unconstitutional, but undemocratic fuels his motivation to bring the South back.

This section emphasizes the great tension that existed between the North and the South, rendered graphically by a dramatic political cartoon from 1861 in which two figures representing the "Pending Conflict" menace one another with raised clubs. South Carolina becomes the first state to secede. An image of this Secession Ordinance illustrates the Southern belief that the Union was a confederacy of sovereign separate states. Just as they had joined the Union by ratifying the Constitution, the people of each state could vote to withdraw ratification and dissolve the connection. Northerners, however, rejected this doctrine of "state sovereignty." They believed that when they ratified the Constitution, a united people had established a nation. It could not be broken by a single state.

In the end this issue was decided on the battlefield. Images of the firing on Fort Sumter heighten the drama in this section, highlighting Lincoln’s fateful decision to re-supply the fort. The section goes on to explore his use of presidential war powers and the actions he took without the official consent of Congress. Visitors are confronted with the question: Had Lincoln exceeded his constitutional authority?

An image of a triumphant Union soldier anchors the Bound section. In one hand a sword is held high, in the other he holds an American Flag with a banner reading, "Freedom to the Slave." In this section, visitors confront Lincoln’s struggle with the Constitution’s nearly fatal flaw and the underlying cause of the Civil War. "I have always hated slavery," Lincoln said, but this institution was rooted deeply in the Constitution and could not be uprooted overnight. Because the authors of the Constitution had left slavery in the hands of individual states, it remained beyond the reach of the federal government. Lincoln’s unsuccessful struggle to get the Border States to adopt his plan for gradual, compensated emancipation is depicted in this section with a striking image of a congressional delegation turning their backs on the President. Eventually, the war opened up new possibilities. Lincoln believed the Constitution allowed the president to do in wartime what he could never do in times of peace.

Also included in this section is an examination of the many contemporary thoughts concerning how to best end slavery, including gradual emancipation, colonization, and payment to slave owners. The signing of the Emancipation Proclamation in 1863 and finally the ratification of the 13th Amendment in 1865 served to end slavery forever and everywhere in the United States.

Dissent begins with the chaos of the Civil War and the perils that Lincoln faced: Saboteurs blew up bridges; mobs blocked the movement of Union Troops; spies lurked in Washington. Dramatic images of the New York City draft riots of 1863 illustrate the magnitude of the challenge Lincoln faced. Clearly the President had to respond. But, what would he do? Visitors learn that to meet the crisis, Lincoln claimed extraordinary powers. He suspended the writ of habeas corpus — the provision in the Constitution that protects citizens against arbitrary arrests — in all the United States. No president had done it before; no president has done it since. By 1863 thousands of civilians had been detained, mostly suspected draft dodgers and deserters and Confederate sympathizers in the Border States and the South. Lincoln refused to back down. "I think the time not unlikely," he said, "when I shall be blamed for having made too few arrests rather than too many." As military arrests mounted some Americans wondered, were their constitutional liberties being lost?

This section asks the questions — how far could a president stretch his war powers without violating the Constitution? What are the appropriate limits of dissent in wartime? We still debate these questions today.

In addition, this section looks at issues of freedom of the press as well as Lincoln’s re-election in 1864, which he won in a landslide against George McClellan. For Lincoln the election itself was a great prize. The fact that it had been held in the midst of a civil war showed "how sound and how strong we still are."

The concluding Legacy section is dedicated to the Gettysburg Address and to the unfinished work of living up to the ideals Lincoln cherished — equality, freedom, and democracy. A powerful graphic of the field at Gettysburg serves as a backdrop, and morphs from a black and white image of the place as it appeared during the Civil War, to a color image of the field today.

The powerful words of the Gettysburg Address will be printed here. In a place where thousands died, Lincoln spoke about a birth. At a site where brave men fought and died, he challenged us to continue their struggle. No one knew better than Lincoln that the United States had not yet lived up to the ideal. So, he challenged future generations to take up that cause.

In a space for reflection, visitors will be asked, "Has America lived up to the ideals Lincoln fought for — equality, freedom, democracy?"