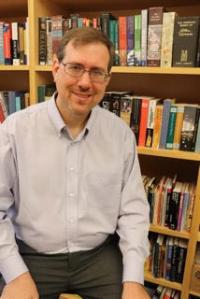 A native of both the DC area and east-central Pennsylvania, Dr. Mitchell brings a dual background of scientific and artistic training to the table.  As a member of EIU's theatre faculty since 2001, he primarily teaches the theatre history/literature sequence of courses in the department.  He has published and presented both internationally and nationally in his primary area of research expertise, the plays of August Strindberg.  He is also a director and dramaturg, participating in many University Theatre productions, including Lonely Planet (2014), I Don't Have to Show You No Stinking Badges! (2013),  A Strindberg Café (2012), Volpone (2011) and Tartuffe (2011).  [Production photos]  Dr. Mitchell is also a proud affiliate faculty member of the Women's Studies, Film Studies, and Asian Studies programs, and remains active teaching and writing in those areas as well.  He is also an affiliated faculty member of the EIU Center for the Humanities.

Since 2014, Dr. Mitchell has been serving as Interim Associate Dean of Eastern's College of Liberal Arts and Sciences (formerly the College of Arts and Humanities); his office is relocated to the Deans' Suite of the Doudna Fine Arts Center for that period.