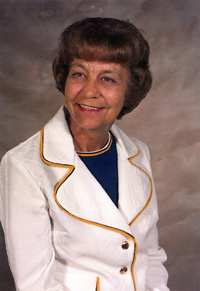 
Dr. Livingston began her graduate education as a non-traditional student. After being widowed, she earned her doctorate degree by commuting from her position as dorm director at Northern Illinois University in DeKalb to Columbus, Ohio over several summers. Her dissertation was titled: "Social, economic and political influences on the development of residence halls for women in colleges and universities in the United States."

Dr. Livingston came to EIU in 1968 to teach a summer psychology class and ended up as the first woman to join the department. She loved teaching and frequently taught developmental courses. After her retirement in 1988, Dr. Livingston continued to teach in the surrounding area via EIU's School of Continuing Education.

She was devoted to her two grandchildren and passed on her drive for higher education. She also enjoyed gardening and winning at blackjack. Dr. Livingston passed away in 1996.