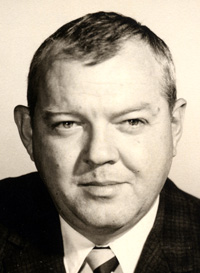 
Dr. Hustmyer joined the psychology department in 1969. His dissertation was titled: "The differentiation hypothesis and stimulus generalization."

Dr. Hustmyer was an active researcher both prior to and during his time at EIU. His work covered a variety of sensory related topics, most notably eye movements, the autonomic nervous system, neuropsychology, dependency, and the psychological aspects of color. Dr. Hustmyer often engaged students in his research.