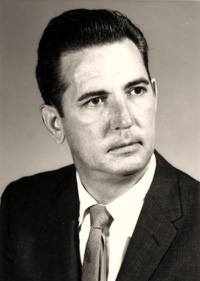 
Dr. Looby came to Eastern in 1959, as a professor of Education. He became one of the first faculty members to join the newly formed Psychology department in 1964.

Dr. Looby's dissertation was titled: "An inventory of permanent cumulative pupil record systems in selected Missouri school districts." His focus was on exceptional children in both his research titled the "Effects of Special Training on the Achievement and Adjustment of Gifted Children" and his book, A New Approach of Gifted Child Education.

During his time at EIU, Dr. Looby was associated with Psi Chi and the Illinois Education Association. He was an advocate of improving educational opportunities for gifted children and was also affiliated with the Council of Exceptional Children Association.

He was a Mason, enjoyed gardening, and was an avid reader of both science and science fiction literature. Dr. Looby died of coronary artery disease in 1973, at the age of 52. His body was donated to science per his wishes.