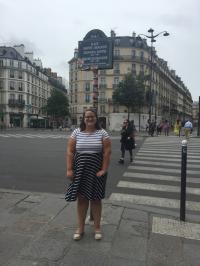 
Blair Watson is an Instructor of French at Eastern Illinois University, where she teaches all levels of French – from introductory language courses to advanced classes on culture, film, and literature. She serves as the advisor to EIU’s French Club and coordinates the school’s French conversation table, la table française. She is currently developing courses on the literature of immigration as well as an Introduction to Francophone civilizations and cultures from France, the Antilles, and Africa to be offered soon in the Department of World Languages and Cultures. She is also recruiting for a 3 week summer abroad program in Dakar, Senegal!

Dr. Watson received her Ph.D. in French Literature from Emory University. Her scholarly work focuses on the questions of criminality and violence in literature and film of the francophone African diasporas, such as in the novels of Yasmina Khadra and films of Raoul Peck. Her research has been published in Francosphères and Studies in French Cinema. She received her M.A. in French Translation from Kent State University and B.A. in French from Wake Forest University.