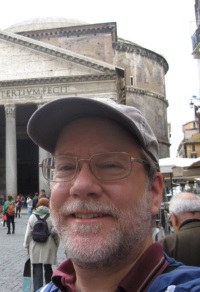 
In my history classes I want my students to encounter the treasures of the past and learn the lessons of human experience, to think critically and creatively about history, and to develop a sense of curiosity that they will carry with them into their own futures.  Whatever their major, whatever their goals in life, I encourage my students to let the humanities guide their journey.  History and its related fields allow us to experience the world in its wondrous variety and leave us with an inquisitiveness that lifts us above the banalities of an existence that knows only career objectives and materialistic goals.  I try to promote a love of learning that not only can make students' future careers successful by whatever measure their chosen industries apply but can make their journey through life enriched and fulfilling.

Two distinct fields compete for my scholarly time: political uses of myth in the Greek world (and related issues involving perceptions of myth by Strabo, Pausanias, etc.) and Roman Armenia (and related issues involving the Arsacids, the Sasanians, Roman frontier studies, etc.). My first book Kinship Myth in Ancient Greece (reviewed in BMCR) examined communities (and sometimes kings like Alexander the Great) that invoked shared putative ancestors to justify a diplomatic venture.  On authors’ attitudes toward myth I have published pieces in various venues, with recent studies in two Oxford handbooks.  On the Roman side, I am currently writing a book on Roman Armenia.  My interest in this topic has yielded a number of recent publications in journals around the world.  I am the recipient of three Achievement and Contribution Awards, two in Research in 2014 and 2020 and one in Balanced (Teaching, Research, and Service) in 2016.