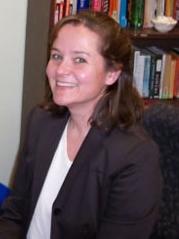 Marjorie Worthington received her bachelor's degree from Dartmouth College, her master's from the University of Missouri and her PhD from Indiana University. She teaches courses in American literature and focuses her research on subjects related to contemporary, particularly experimental, fiction. Her work has appeared in journals such as LIT: Literature, Interpretation, Theory;Twentieth-Century Literature;Studies in the Novel; and Critique. Her book The Story of "Me": Contemporary American Autofiction was published in November, 2018 by The University of Nebraska Press.

“Ghosts of Our Fathers: Spectral Authorship and Authenticity in Ellis’s Lunar Park.” Papers on Language and Literature. 50.1 (Winter 2014): 59-89.

“Bodies That Natter: Virtual Translations and Transmissions of the Physical.” Critique: Studies in Contemporary Fiction. 43.2 (Winter 2002): 192-208.